The Roman church of Sant’Agnese in Agone sits along the edge of the Piazza Novona. One of Rome’s greatest public spaces, the piazza is the site of the ancient Circus Agonalis. The piazza’s linear, curved-end shape is formed by an almost unbroken perimeter of individual buildings rising from the pavement to modest height in silent agreement as to the nature of the public space they form. The great church is the piazza’s exception. Rising to superior height and obligating her visitors to ascend from the piazza, St. Agnes underscores the Church’s civic role and cultural contributions while properly situating the Church in the hierarchical arrangement of society.

The Church, like each of its members, enjoys natures both public and private. Separated from the state, the Church is endowed with unique freedom of movement, with which she is able more effectively to direct and contribute to the preservation and improvement of culture in general and Christian culture in particular. Thus the Church can be properly seen as a maximally free forum for individual participation in the civic realm.

The Church presents herself most publicly and most privately via the one art capable of delivering both at once: architecture. The most conspicuous of the arts, architecture is unavoidable: One can put off visiting the Piet in St. Peter’s, but one may not avoid seeing the dome of the basilica. While setting forth the Church’s public image, the architecture of the church building also provides the setting for the most conspicuous and most intimate Christian act: the offering of Christ’s sacrifice.

closer to home, Manhattan’s Cathedral of Saint Patrick also embraces its requirement for participation in the civic realm. Presented with only a short stretch of Fifth Avenue”no ancient circus here”the architect withdrew the facade of the church eastward from the avenue’s established building line not to withdraw the Church from the polis but, rather, to form a public square of its own for the Church to command. The cathedral’s west front is easily one of the most populated public spaces in the city. Here is the church building serving the indivisibly public and private natures of the Church.

Curiously, in the same public square, directly across Fifth Avenue and in his own confined enclosure, crouches one of the most aggressively pagan responses to the Christian faith ever promulgated by the arts. In direct alignment with the cathedral’s great western doors, long center aisle, and high altar of sacrifice, the long-shelved Titan Atlas struggles in obsolescent effort to carry creation. We thank Atlas, for his constant vigil lends unintended richness to the Christian tradition of penitential veneration. 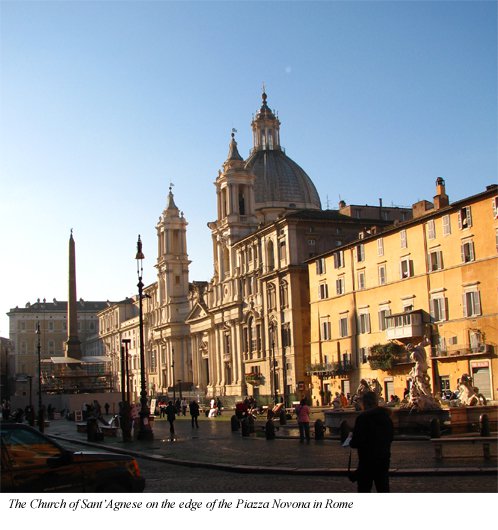 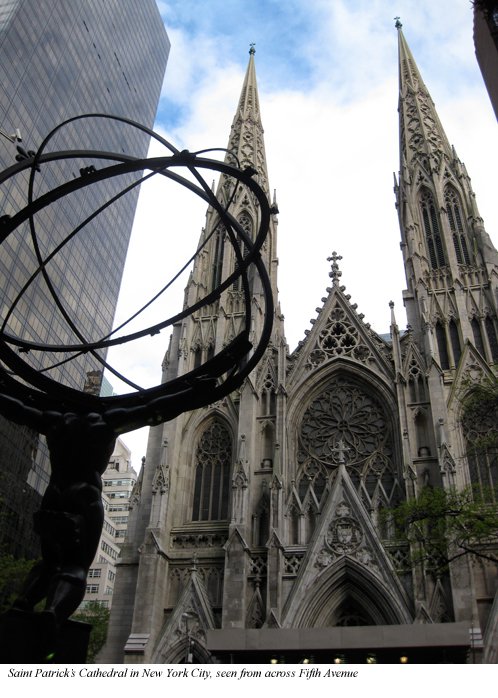 James McCrery’s Washington, D.C. firm, McCrery Architects, is dedicated to ecclesiastical works. He was recently commissioned for a new Carmelite monastery in Wyoming.