The statue of a slender young John the Baptist, seated on a rock with a lamb at his side, only a little over three feet tall and carved about four hundred years ago by a sculptor known mainly to scholars, has a lot to tell us about the spiritual dimension of a classically informed culture of design embracing sculpture and painting as well as architecture.

Younger Catholics have taken stock of the not terribly fruitful modernist tendencies the Church has espoused since the Second Vatican Council, as well as the enduring religious relevance of its classical artistic heritage. As a result, we have new church buildings like the strikingly fine Our Lady of the Most Holy Trinity chapel at Thomas Aquinas College in southern California, designed by Duncan Stroik. It is a resoundingly successful exercise in a highly refined architectural idiom that draws on different strands within the classical tradition, from Florentine Renaissance to Spanish Mission.

But this chapel doesn’t boast sculptural decoration on a level with the architecture. Both in form and composition, the statues of Aquinas and Augustine in the niches flanking the main entrance are discordantly crude. Completely static figures, almost primitive in their lumpen realism, and rather dwarf-like in the sense of scale they communicate, they are deeply unworthy of this building. Thomas Aquinas College is not to be singled out for this failure. The huge, deep-relief portrait of Martin Luther King, Jr. dedicated at his new memorial in Washington, D.C. last October is far worse, and testifies more disturbingly to the severe impairment of cultural memory that the Church can help redress.

Classical sculpture’s formal qualities, like their religious origins in Greek antiquity, are little understood today. But they need to be understood if the recovery of the classical tradition now underway in sacred and secular art alike is to be fully realized. That’s why The Young Saint John the Baptist deserves our consideration.

The sculptor, once thought to have been Michelangelo, was in fact Giovanni Francesco Susini, on whom Michelangelo exerted a significant influence through Susini’s teacher Giambologna. It is not known for whom the statue, an underappreciated masterwork in the National Gallery of Art in Washington, D.C. was created. The gallery’s curator of sculpture and decorative arts, Mary Levkoff, suggests that it could have been set above a holy-water font in a church in such a way that it would present compelling views to people approaching the font (and the sculpture) from the front or sides. Before the Quattrocento ended, the great Verrocchio had demonstrated what sculpture could do to activate the space not only within but around a niche with his magisterial Christ and Saint Thomas, created for the Orsanmichele in Florence, and the same body of formal knowledge is evident in The Young Saint John the Baptist.

The partially clad Baptist’s extended right hand, which holds the baptismal cup, rests on his left knee, thereby endowing the composition with an emphatic spatial depth. Susini was well aware of Greek sculptors’ concern that their work not be read in merely pictorial terms from static viewpoints”that sculpture be experienced as a spatially dynamic art form.

You don’t just stand in front of Susini’s statue, experiencing it as you would a painting. You move around it. Its spatially active presence makes it more real. That’s what the Greeks and later Michelangelo and the sculptors he most deeply influenced were about: elevating the human figure above the realm of optical phenomena and thereby endowing it with a more visceral presence, a deeper aesthetic resonance, and a greater emotional significance.

Hence the torsion built into the figure of the Baptist. If he were just sitting there facing forward, like many a nineteenth-century “great man” statue, he would offer only discrete quasi-pictorial profiles, front and sides. Instead, the extension of the Baptist’s right arm causes the torso to rotate slightly on the trunk, while the turn of his head in the opposite direction is reinforced by the gentle counterthrust indicated by the left hand planted on the rock on which he sits. In other words, he is still, but he is anything but static.

And with his head turned in one direction and the baptismal cup (in the form of a shell) extended in another, there is an ambiguity as to what his next motion might be. That there are different possibilities is reiterated by the turn of the lamb’s head in the opposite direction from the Baptist’s—a compositional device that provides a lighthearted contrast. Such ambiguity endows the sculpture with greater emotional complexity: The composition is resolved, but there is no suggestion of the completion of an action. Suspended animation of this kind serves to further remove Susini’s Baptist from the realm of commonplace experience, an effect devoutly to be desired in sacred art.

The tranquil mood projected by The Young Saint John the Baptist is a far cry from the haggard, penitential standing Baptist carved by Donatello a century and a half earlier in a static, pictorially oriented, late-medieval realist idiom. A very distinct aesthetic sensibility guided Susini to represent John as a pastoral youth living in harmony with nature, employing a softer, more feminine anatomical topography that ancient sculptors often reserved for Dionysus or Apollo. The eye thus glides along Susini’s figure, rather than being detained by the static muscular forms typical of the male nude.

Not that there wasn’t a fully classical precedent for a more realistic, long-suffering John the Baptist. Greek sculptors took to portraying aging fishermen, peasants, boxers, and hags in this manner after the death of Alexander the Great. Poignant evocations of hard lives in a cruel—indeed, fallen—world resulted. We encounter their echo in the twilight realism of Caravaggio’s sculpturally informed biblical scenes. The very breadth of the classical tradition allows for such diversity of inspiration and interpretation. 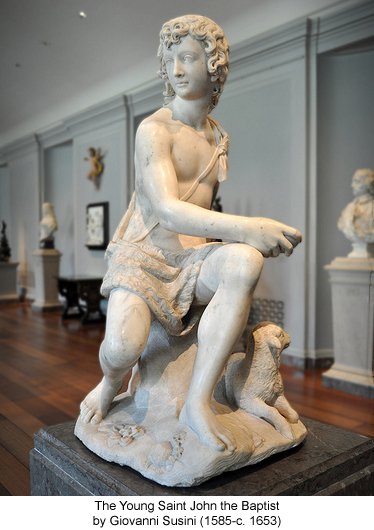 One more aspect of the complexity of Susini’s sculpture bears mention. The forms of the Baptist’s body are very precisely defined, and there is a geometric interplay between them. Baltimore sculptor Brad Parker says this interplay, which he calls “shape orientation,” revolves around an abstraction of the head as a unitary shape and the derivation of anatomical forms from that shape or portions of it. The shapes of the Baptist’s pectoral muscles derive from his cheeks, for example.


This technique endows the figure as a whole with an organic unity, while the sinuous, flowing topographical pattern these anatomical shapes form helps lead the eye in uninterrupted trajectories not just along but around the figure, again emphasizing the spatial depth of the composition. An obvious spiraling path for the eye to follow is from the extended right hand and up the arm, along the shoulder blade, behind the neck, and around the head.

You can see a fair amount of sculpture on a level with Susini’s statue in the churches of Europe. In America, you have to look for it in museums as a rule, because the formal knowledge that guided Susini’s work was eclipsed after the French Revolution. Still, we have two important examples, both by French sculptors, of statuary belonging to the same tradition.

Frédéric Auguste Bartholdi’s Statue of Liberty is not on a level, in formal terms, with the work of masters like Susini. And yet Lady Liberty holds her own amid the vastness of New York Harbor precisely because of the spatial dynamism of her design. Not just her stride and the subtle torsional thrust with which Bartholdi endowed the torch-raising arm, but also the drapery lines that guide the eye around the figure contribute to her powerful structural presence.

Lady Liberty is generally recognized as America’s greatest monument. But our finest public statue, pound for pound, is Jean-Baptiste Houdon’s life-sized George Washington, which stands in the rotunda of the Virginia Capitol in Richmond. It shows Washington clasping a walking stick in one hand, with the other reposing on a bundle of fasces (the Roman symbol of republican liberty).

Houdon was one of the last of the great European masters, and his Washington, too, compels you to take it in from different vantage points. This portrait statue is appropriately endowed with a realism that contrasts with Susini’s idealized saint. And yet both works share the same formal precision and spatial dynamism, which in Washington’s case allows the statue to both dominate and animate the large rotunda in which it is situated.

During the Renaissance, the Catholic Church served as the most important institutional incubator of the classical tradition in architecture and its allied arts. Michelangelo’s Sistine Chapel ceiling thus ranks as one of the very greatest classical works of all time. Catholic institutions once again have a crucial role to play in the tradition’s resurgence.

The first step is to understand that classical sculpture is an ineluctably retrospective art whose norms were established in antiquity; evolutionary notions of progress simply do not apply. Even so, the tradition does not revolve around the regurgitation of masterpieces. Copying great works nurtures familiarity with complex issues in form and composition. But such familiarity must lead in due course to emulation rather than duplication. It must culminate in vitally new creations.

The second step is to organize programs in artistic training and art-historical instruction geared to the re-establishment of classical artistic norms. The third is to perpetuate them, through a more informed patronage, in the design and decoration of the churches that will be built or renovated in the future.

It is important to bear in mind that the formal complexity and richness of Susini’s Baptist ultimately derives from the Greeks’ realization that the spiritual significance of the human body’s representation lay not merely—or even necessarily—in beauty, but rather in an intensified reality grounded in an aesthetic unity, a wholeness, transcending our inevitably fragmentary experience of nature. The quest for this intensified reality led the Greeks to seek to override, so to speak, the pictorial nature of human vision itself in their sculptural creations.

It is this anti-pictorial, emphatically spatial or structural aspect of their art that sculptors increasingly lost sight of during the nineteenth century. But it explains why contemplation of the majestic figures in Michelangelo’s Medici Chapel is an experience more spiritual than aesthetic. Their aesthetic content, the master well knew, was the means, not the end.

No formal idiom can do greater justice than the classical to a religious tradition, and a liturgy, grounded in the distinction between the contingent and the typical. By the same token, any artistic idiom can be trivialized. The Romans secularized aesthetic experience, converting Greek statuary into a commodity, a status symbol. But given the utter cultural confusion reigning in our midst, the classical resurgence, in both its religious and secular manifestations, has a redemptive role to play in contemporary life that deserves all the encouragement it can get. In sharpening this important and profoundly countercultural movement’s artistic focus, Catholic patronage could make a decisive contribution to the realization of its spiritual possibilities.

Art cannot provide a path to salvation. But enlightened Catholic patronage can and should support creative endeavor that complements and enriches the experience of the liturgy among the faithful while bestowing potentially generous collateral benefits on the culture at large.

Catesby Leigh is an art and architecture critic in Washington, D.C.