In our ongoing roundup of commentary on Pope Benedict’s social encyclical Caritas in Veritate , the Distributists and Austrians weigh in, and renegade liberation theologian Leonardo Boff believes the Pope could use a good dose of Marxism (little surprise, there). . . . . Continue Reading »

The Lost Art of Reading

As we rush into another week of blogging, posting, texting, and tweeting, consider David Ulin on “the lost art of reading” : Reading is an act of contemplation, perhaps the only act in which we allow ourselves to merge with the consciousness of another human being. We possess the books . . . . Continue Reading »

In May 2009 the Bishop of Paisley, Rt Rev Philip Tartaglia, issued a pastoral letter — read aloud to every parish in Scotland — cautioning Catholics against an obsessive reliance upon new technology : “In dialogue with others we need to be wary of the inane chatter that can go on . . . . Continue Reading »

What did Margaret Sanger think of abortion?

That Margaret Sanger — eugenicist, birth control activist and founder of Planned Parenthood — wished to preserve society from blacks, immigrants, and the “feebleminded, idiots, morons, insane, syphilitic, epileptic, criminal, professional prostitutes, and others” through a . . . . Continue Reading »

Introduction Caritas in Veritate is the first social encyclical of the 21st century, and Pope Benedict XVI’s chosen topic couldn’t be timelier. Forty years after the publication of Pope Paul VI’s Populorum Progressio, and following in the footsteps of his predecessor John Paul II . . . . Continue Reading »

The Vatican has announced that Benedict XVI’s new encyclical, titled Caritas in Veritate, will be released Tuesday, July 7: 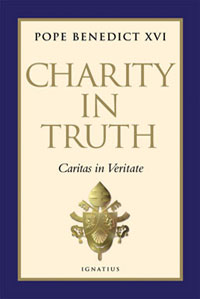 Signed by the Holy Father on June 29th, the Feast of Sts. Peter and Paul, and released in time for the G8 international summit in L’Aquila, Italy (July 8-10), Caritas in Veritate will be the first social encyclical to be written in almost two decades. There has been much speculation as to what the encyclical will say.

Fortunately, the Pope himself has given several helpful indications… . Continue Reading »

Fascinating examination of Thomas Kinkade, Joe . I was unaware of (and impressed with) his earlier work—which of course prompts the question: what happened? This “60 Minutes” interview/profile of Kincade is quite revealing, as an artist seduced by mammon : “There’s over . . . . Continue Reading »

Life is Cheap in Iran; Bullets, Not So Much.

Reminiscent of Orwell, or perhaps Terry Gillian’s Brazil : Upon learning of his son’s death, the elder Mr. Alipour was told the family had to pay an equivalent of $3,000 as a “bullet fee” —a fee for the bullet used by security forces—before taking the body back, . . . . Continue Reading »