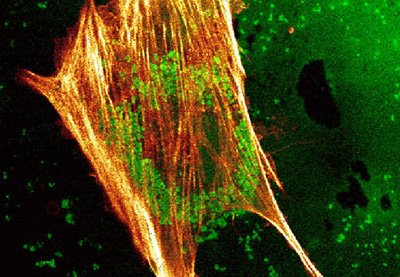 Can you imagine the banner headlines if this were an embryonic stem cell success? From the story:

[Adult]Stem cells transplanted into early-phase multiple sclerosis patients stabilised, and in some cases reversed, the debilitating neurological disorder, according to a study published Friday...In clinical trials, a team of scientists led by Richard Burt of Northwestern University in Chicago essentially rebuilt the immune system of 21 adults — 11 women and 10 men — who had failed to respond to standard drug treatments. First they removed defective white blood cells that, rather than protecting the body, attacks the fatty sheath, called myelin, that protects the nervous system.

The immune systems were then replenished with so-called haemopoeitic stem cells — extracted from the patient’s bone marrow — capable of giving rise to any form of mature blood cell. The technique is not new. But this was the first time it had been applied to young and relatively healthy individuals in the early, so-called “relapsing-remitting” phase of the disease. Participants had had MS for roughly five years.

After an average follow-up period of three years, 17 of the 21 patients improved by at least one point on a standard disability scale, and none had a final score lower than before the stem cell transplant. The procedure “not only seems to prevent neurological progression, but also appears to reverse neurological disability,” concluded the study, published in the British medical journal The Lancet.

Please note this is not a cure. But from my non scientific reading of various studies, it seems that these treatments usually help improve the conditions of patients rather than eradicate the diseases entirely.

But hey, it beats a kick in the teeth!
0
Print
Email
Prev Article
Next Article