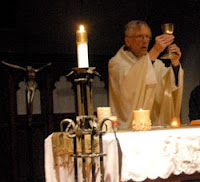 Legendary Georgetown University theology professor, Fr. Thomas King, S. J., died last night. He was the founding president of University Faculty for Life, an academic society on whose board I sit. We will miss our beloved Fr. King.

The following appeared last night on the website of The Hoya , Georgetown’s student newspaper:

King was a professor of theology; he taught The Problem of God and classes covering the works of Pierre Teilhard de Chardin, Thomas Merton, Jean Paul Sartre and C. G. Jung.

King also was a strong presence outside of the classroom. During his second year of teaching at Georgetown, he began offering 11:15 p.m. Mass six days a week at Dahlgren Chapel of the Sacred Heart. These masses have become increasingly popular with Georgetown’s student body over the past 40 years.

He had also served as a chaplain in residence and was an active participant in student retreats.

During his time at Georgetown, King wrote nine novels, including “Teilhard’s Mass: Approaches to ‘The Mass on the World’” (published in 2005) and “Jung’s Four and Some Philosophers: A Paradigm for Philosophy” (published in 1999).

In 1999, The Hoya named King “Georgetown’s Man of the Century,” claiming that “no one has had a more significant presence on campus and effect on students than Father King.”
Eternal rest grant to him, O Lord, and let perpetual light shine upon him.

Update : I just received this from my friend Fr. Joseph Koterski, S. J., a fellow UFL board member: “The funeral Mass for Father King is scheduled for 9am on Saturday June 27, 2009 in Dahlgren Chapel on the Georgetown University Campus. The wake will take place all day and evening on Friday June 26th. Burial will be in the Jesuit Cemetary on the Georgetown campus.”