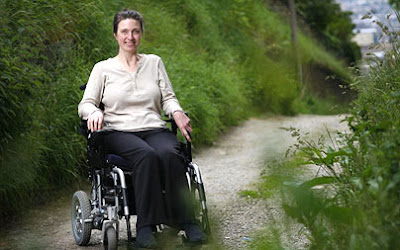 Debbie Purdy, who has multiple sclerosis—which is not generally a terminal illness—won a minor high court ruling today requiring the prosecutor to inform the public when those who facilitate suicide tourism, will be prosecuted. From the story:

Terminally ill [Me: No she’s not] Miss Purdy fought to find out whether her husband, Omar Puente, would be prosecuted if he helped her die at an organisation such as Dignitas in Switzerland.

She demanded that the Director of Public Prosecutions state when he would bring cases for assisting suicide abroad, currently a crime punishable by up to 14 years’ imprisonment. No one has been convicted of the crime even though an estimated 115 Britons have committed suicide at Dignitas. Her initial case was rejected in the High Court, as was an appeal to the Court of Appeal. But she took the case to the highest court in the land and five Law Lords ruled on Thursday afternoon that the DPP must set out the circumstances in which it would prosecute.

But this did not legalize assisted suicide in the UK. From an analysis:

The court has made two important things clear. The first is that it is no part of its function to change the law in this area. The court’s function, it says, “is to say what the law is and, if it is uncertain, to do what they can to clarify it. If changes are to be made, this must be a matter for Parliament”. In fact, Parliament has addressed this complex and controversial subject at length four times in the last six years. Parliament does not believe that the law could be changed to meet the wishes of a minority of determined people without putting many more vulnerable people at risk of self-harm.

The court has also made clear that requiring the DPP to issue an offence-specific policy statement does not mean that Ms Purdy’s husband (Mr Omar Puente), or anyone else who assists an intending suicide to go abroad for the purpose, can expect immunity from prosecution. Every case will remain liable to investigation after the event. This is an important safeguard. The possibility of investigation provides a protection against malicious coercion or manipulation of seriously ill people who may be less sure than Mrs Purdy appears to be about ending their own lives but who could easily by pressured to do so either by others who stand to gain from accelerating their deaths or by their own feelings of anxiety about the care or financial burden they may be imposing on their families or friends.

Meanwhile, Switzerland may be growing tired of being Kevorkian as a country, and is thinking of restricting its loosey, goosey assisted suicide law. Let us hope they do, and let us hope the prosecutor sets forth a statement in which all assisters in suicide, whether it is done in the UK or overseas, will be subject to prosecution.

The spin doctors are calling this a landmark ruling. It is hardly that. It now depends on whether the public prosecutor has the guts to enforce the law.
0
Print
Email
Prev Article
Next Article