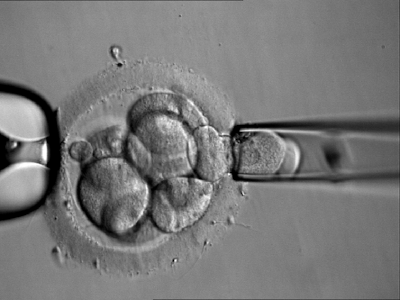 Pre-implantation Genetic Diagnosis (PGD) is a procedure wherein one cell of an eight-celled embryo is removed and eugenically tested for defects, sex, appearance attributes—whatever the prospective parents wish to cull from their prospective families by discarding embryos that don’t measure up.  But a new study casts doubt that the procedure is safe for the baby that is allowed to be born.  From the story:

Ran Huo, Qi Zhou and colleagues used a mouse model to examine how a blastomere biopsy, as the key manipulation during the PGD procedure, could affect fetal, neonatal and adult development. They found that there were no differences in embryo development prior to uterine implantation in the biopsied and control groups, which is consistent with results found in humans. However, following implantation, successful births from biopsied embryos were significantly lower than in controls.

Following birth, the authors tracked many physical and behavioral properties; the two groups of mice were similar in many respects, though mice in the biopsied group on average had higher body weight and poorer memory in maze tests. To get a more detailed picture of these memory defects, the authors performed a proteomic analysis of adult mouse brains; 36 proteins displayed significant differences between biopsied and control groups, 17 of which are closely associated with neurodegenerative disorders like Alzheimers and Down Syndrome. The authors suggest that the developing nervous system may be sensitive to blastomere biopsy, and that more studies should be performed to address any possible long-term adverse effects of PGD to ensure its safety.

Shouldn’t that  have been done before PGD became routine?

The whole field of IVF has been practiced recklessly from the start, with little safety testing, and in the USA, virtually no regulations.  Alas, that is unlikely to change. Bioethicists and reproductive health lawyers dogmatically assert that people have both a right to procreate by whatever means they choose, and have the right to produce the kind of baby they want, which requires PDG.  In such an anything goes milieu, the words “slow down” simply do not resonate.
0
Print
Email
Prev Article
Next Article