Despite the title, the purpose of this post is not to engage in the ongoing discussion regarding “roots” music and “localism”, etc. Instead, I hope to offer some alternatives to those who seek something different than the usual musical fare offered on the 4th of July. Here are my recommendations for a few “roots” recordings for Independence Day listening that hearken back to the early days of the American republic.

My first recommendation is Liberty Tree by The Boston Camerata. This excerpt from the program notes describes the artists’ vision in producing this recording: 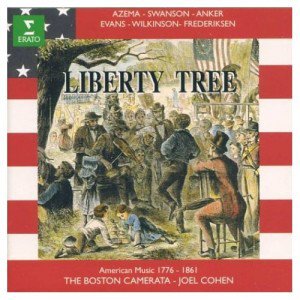 Our view of the American past is shaped by many things — dimly remembered history lessons from our earliest school days; the posturings of present-day public people; and, perhaps most importantly, by the popular media — radio, television, and the movies. Talk about static! Can we ever, then, experience our collective past as it “really” was? Hardly — those days are gone forever. But, on the other hand, can we get closer to our roots than heretofore? Can we eliminate some of the distortion and noise? At least as far as music goes, I am convinced that a cleaner, truer approach is possible.

The partsongs, marches, anthems, jigs, and ballads we perform for you here were all part of American life during the early decades of the country’s existence: between the founding of the Republic and the Civil War. This, the everyday music of villages and towns, represents a hybrid tradition. Notated and harmonised in a rough, pragmatic way by musicians of the time, these pieces are not learned or complex enough to be taken seriously as “high” art by most music historians. Yet, since they managed nonetheless to make their way onto paper and into “polite” society, they are surely a bit more refined and worldy-wise than the folk song of the truly rural settlers. It is in this neglected, between-two-worlds repertoire, I maintain, that we can find much of the soul of early America . . .

. . . You will experience a lighter, less aggresive tonal pallette than the one we tend to associate with patriotic fervour, or with history with a capital H. Yankee Doodle can be heard as the perky, disrespectful teenage piece it originally was. On the Road to Boston makes one visualise the road, perhaps the old one from Quincy and Dorchester; much narrower than the commuter-clogged Southeast Expressway, unpaved, with horse and foot traffic only — and no billboards. And the untutored harmonies in a piece like Clovergreen give a truer, sharper sense of life on the (cultural) frontier than the sugary sweetness of the same tune played by saxophones (as Auld Lang Syne) on New Year’s Eve from coast to coast. True it is that we can’t go back to those places, but fragments of what they once were do illumine and enrich our contemporary imagination.

The program for  Liberty Tree  includes:

Next is Liberty! by fiddler Mark O’Connor (with Yo-Yo Ma, Wynton Marsalis, and James Taylor), which is the soundtrack from the excellent PBS series Liberty! The American Revolution . Here’s a description of the recording from the PBS website : 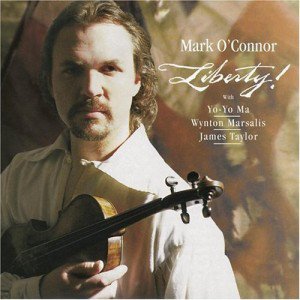 The music for LIBERTY! The American Revolution features arrangements of traditional Revolutionary-era folk melodies by Mark O’Connor, as well as original compositions by Richard Einhorn and O’Connor. O’Connor, a Grammy Award-winning violinist, performs, along with: Grammy Award-winning cellist Yo-Yo Ma; Pulitizer Prize-winning composer and trumpet player Wynton Marsalis; David and Ginger Hildebrand; and the Nashville Symphony. O’Connor’s “Song of the Liberty Bell” is the series’ main theme. James Taylor and O’Connor perform the traditional song, “Johnny Has Gone for a Soldier,” over the closing credits . . . American music of the revolutionary era drew upon the cultural influences of the people of the new nation - English, Scottish, Irish, German and African - and blended into a sound of its own. Through the interest and involvement of a remarkable collection of artists, that music has been recreated for LIBERTY! in a memorable soundtrack and score, from Sony Classical.


Songs on this recording include:

My final recommendation is a CD that I purchased just prior to last July 4th, Davy Crockett’s Fiddle by Colonial Williamsburg musician Dean Shostak. It has become my favorite among these recordings. As the title suggests, Davy Crockett’s Fiddle  features Shostak playing the fiddle that purportedly belonged to frontiersman and Congressman David Crockett, and all the instruments and music used on the recording date from the time period in which Crockett lived (1786-1836). Shostak relates what led him to make this recording in the liner notes: 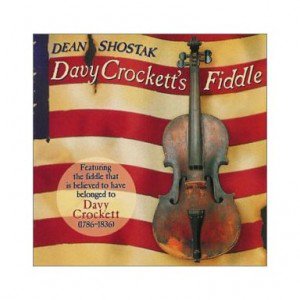 I first learned about Davy Crockett’s fiddle when I saw its picture in the April 2001 issue of USAToday; an old well-worn violin. That was the beginning of a wonderful musical adventure. I contacted the good folks at the Witte Museum, who owned the fiddle, and proposed that we have it restored. I wanted to make a recording of music of Davy Crockett’s time on his very own fiddle accompanied by period instruments.

They enthusiastically agreed, and we embarked on an remarkable historical journey; restoring the violin, researching and learning the music Davy Crockett would have played, and recording it right in San Antonio where he spent his final, heroic days.

When I returned to Williamsburg, VA, I assembled some of my favorite early American musicians together to create musical scenes from Davy’s life using his own fiddle . . .
The program of traditional music (and one traditional arrangement of a not-so-traditional medley of tunes) includes:

Whether you’re a history buff, a fan of early American music, or just want something different to listen to on Independence Day, I highly recommend each of these recordings.