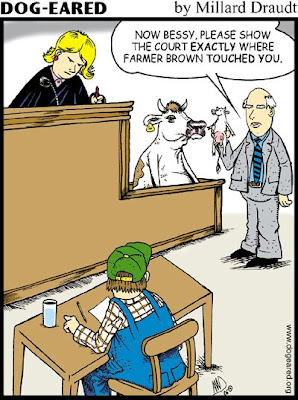 As promised last week, my extended piece on Cass Sunstein supporting granting animals “standing” to sue in their own names, is now out in the Weekly Standard.  From the column:

Imagine you are a cattle rancher looking for liability insurance. You meet with your broker, who, as expected, asks a series of questions to gauge your suitability for coverage:

Have you ever been sued by your cattle?

If the answer is yes, what was the outcome of that suit?

Have you received any correspondence or other communication from your herd’s legal representatives threatening suit or seeking to redress any legal grievance?

If you think that’s a ridiculous scenario, that animals suing their owners could never happen, think again. For years, the animal rights movement has quietly agitated to enact laws, convince the government to promulgate regulations, or obtain a court ruling granting animals the “legal standing” to drag their owners (and others) into court.

Animals suing is often laughed at as one of those things that “can’t happen here.” (Anyone who says that line just hasn’t been paying attention for the last 20 years.)

Of course, the real litigants would be animal rights ideologues who would use the courtroom to destroy animal industries:

Animals are not (yet) legal persons or rights-bearing beings, hence, they lack standing to go to court to seek legal redress. That procedural impediment prevents animal rights activists from attacking animal industries “from within,” as, for example, by representing lab rats in class action lawsuits against research labs. This lack of legal standing forces attorneys in the burgeoning field of animal law—who are dedicated to impeding, and eventually destroying, all animal industries—to find other legal pretexts by which to bring their targets directly into court.

With Cass Sunstein—a high Friend of Obama and on board for “animal standing,” and others of that visibility and prestige backing the project, this issue is could unquestionably be implemented:

In a 2004 book which he edited, Animal Rights: Current Debates and New Directions, Sunstein wrote:

It seems possible .??.??. that before long, Congress will grant standing to animals to protect their own rights and interests. .??.??. Congress might grant standing to animals in their own right, partly to increase the number of private monitors of illegality, and partly to bypass complex inquiries into whether prospective human plaintiffs have injuries in fact [required to attain standing]. Indeed, I believe that in some circumstances, Congress should do exactly that, to provide a supplement to limited public enforcement efforts.

Senator Saxby Chambliss( R-GA) has put a hold on Sunstein’s nomination over the issue because of harm it would do to family farms and ranches. (No kidding!) But that isn’t all: Animal standing would be profoundly subversive to human exceptionalism:

But animal standing would do more than just plunge the entire animal industry sector into chaos. In one fell swoop, it would both undermine the status of animals as property and elevate them with the force of law toward legal personhood. On an existential level, the perceived exceptional importance of human life would suffer a staggering body blow by erasing one of the clear legal boundaries that distinguishes people from animals. This is precisely the future for which animal rights/liberationists devoutly yearn.

This stuff could not be more seroius. I even quote a Ninth Circuit Court of Appeals decision stating that animal standing would be constitutional.
0
Print
Email
Prev Article
Next Article