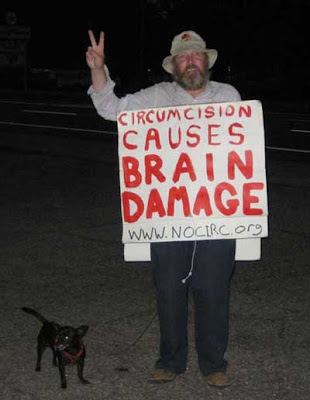 I have never understood the big fuss over circumcision. Some compare it to female genital mutilation.  But that’s completely wrong because unlike circumcision, it is meant to prevent women from experiencing sexual pleasure and is implemented as a method of control.

Circumcision is a religious requirement for Jews and is widely practiced by Muslims.  But it also apparently serves a beneficial hygiene purpose and may even prevent disease. Now, it is being looked at as an HIV preventive.  From the story:

Public health officials are considering promoting routine circumcision for all baby boys born in the United States to reduce the spread of H.I.V., the virus that causes AIDS. The topic is a delicate one that has already generated controversy, even though a formal draft of the proposed recommendations, due out from the Centers for Disease Control and Prevention by the end of the year, has yet to be released.

Experts are also considering whether the surgery should be offered to adult heterosexual men whose sexual practices put them at high risk of infection. But they acknowledge that a circumcision drive in the United States would be unlikely to have a drastic impact: the procedure does not seem to protect those at greatest risk here, men who have sex with men.

Recently, studies showed that in African countries hit hard by AIDS, men who were circumcised reduced their infection risk by half. But the clinical trials in Africa focused on heterosexual men who are at risk of getting H.I.V. from infected female partners.

This sure seems like a putting a lot of emphasis into what would prove to be a very minor corrective.  The only truly efficacious way to prevent HIV is for people to stop engaging in unsafe sexual practices. AIDS prevention efforts that try to pretend otherwise are doing no one a favor because it takes our eye off that ball.
0
Print
Email
Prev Article
Next Article