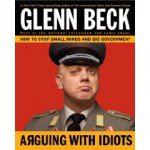 The late film critic Pauline Kael is often quoted as having said, in the wake of Richard Nixon’s landslide victory in the 1972 presidential election, that she couldn’t believe Nixon had won since no one she knew had voted for him. Perhaps I am similarly out of touch with my fellow Americans because I don’t know a single person that will admit to watching The Glenn Beck Program —and yet its one of the highest rated shows on cable television.

If you’ve never watched the show before (and if the ratings are any indication, you have) you probably can’t fathom just how far past the point of reason and sanity Beck is willing to go. As James Joyner says , “Glenn Beck continues to impress in his ability to top himself with zaniness. Today, he explained how ‘they’ have all manner of plans to destroy America and make it more like Cuba. And ‘they’ may be getting away with it because ‘they’ are so far ahead of us.”

Such talk is so crazy you’d be justified in assuming it was the rantings of a deluded conspiracy-obsessed dupe. But though Beck is narcissitic and weird, I don’t think he’s either stupid or insane. So could there be something else going on? Beck fancies himself something of a comedian so you have to wonder, “Is this all an elaborate put-on?”

Stephen Colbert has shown that riches and fame can be had by playing a stereotypical right-wing bloward, a parody of a Bill O’Reilly-style talk show host. But Colbert always has a wink and a smile to provide just enough ironic detachment so that no one mistakes him for being a real conservative. Beck seems to be offereing up an over-the-top parody too (assume, for the sake of my conspirtorial musings, that it is a put-on) but he does it without ever breaking character. Take, for instance, his recent spelling “gaffe.”

Does the missing “C” reveal his cluelessness or is it a subtle nod to those who are wondering if his whole schtick is a grand piece of Andy Kaufman-esque performance art? Could it be that Beck is ramping up the crazy to see how far folks will follow him and that then when the joke becomes untenable—though how much farther can you go after spreading rumors that Obama is planning to put us in concentration camps?*—will he then admit that it was all a ruse?

Or is my own Beckian conspiracy theory outside the realms of plausibility? What do you think? Is Beck the heir apparent of Kaufmann or is he just plain nuts?

*Originally I implied that he had made such a claim. In fact, he merely spread the crazy rumor, said he couldn’t ” debunk them, ” and then debunked them on his show . The fact that no one in their right mind ever believed the rumors were true, should have been enough to avoid the topic. But Beck thinks his own audience is made of kooks and conspiracy nuts so he spent plenty of time on it.