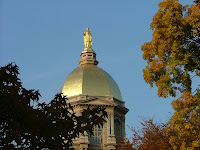 Perhaps Notre Dame President John Jenkins has decided to finally get around to having Notre Dame put its money where its mouth is in regard to the university’s alleged commitment to promoting the sanctity of life.

From the South Bend Tribune :


SOUTH BEND — In the aftermath of the controversial commencement visit by President Barack Obama, the University of Notre Dame’s president plans to participate in the March for Life in January in Washington, D.C.

The Rev. John I. Jenkins, the university president, announced Wednesday in an e-mail to the campus community that he will participate in the Jan. 22 march. He encouraged others to join him.

A March for Life is held each January in the nation’s capital on the anniversary of the Supreme Court’s Roe v. Wade decision that legalized abortion.

“I plan to participate in that march. I invite other members of the Notre Dame family to join me and I hope we can gather for a Mass for Life at that event,” Jenkins wrote in the e-mail.

Jenkins this month formed a campus Task Force on Supporting the Choice for Life. It will be co-chaired by Margaret Brinig, a law professor and associate dean at Notre Dame Law School, and John Cavadini, a theology professor, chair of the theology department and director of the university’s Institute for Church Life.

Jenkins has charged the task force to consider and recommend ways that Notre Dame, informed by Catholic teaching, can support the sanctity of life.

Possibilities the task force has begun to discuss, Jenkins wrote, include fostering serious and specific discussion about a reasonable conscience clause; the most effective ways to support pregnant women, especially the most vulnerable; and the best policies for encouraging adoptions.
Good for President Jenkins. I mean that. Perhaps some good will accrue from Notre Dame’s decision to honor the pro-abortion President Obama. Perhaps Notre Dame will take up the challenge issued by Bill McGurn and others earlier this year to be a “witness” for human life.

And perhaps we’ll actually get to see a commercial during halftime of a Notre Dame football game touting the university’s newfound commitment to promoting the sanctity of life. For that possibility, however, I wouldn’t hold my breath.

The American Papist has more on this story , including the text of President Jenkins’ email announcement.

And here’s the response of the Cardinal Newman Society to President Jenkins’ announcement.


. . . In any event, I believe that those of us who opposed the invitation last year, and who very much want Notre Dame to be what she should be, and what the world needs her to be, should welcome Fr. Jenkins’ announcement. Are the initiatives he described “enough”? No, but I assume that Fr. Jenkins does not regard them as “enough.” Should their announcement end the discussion about whether Notre Dame’s leaders are correct in (what seems to be) their understanding of academic freedom, the nature of a university, or the appropriate relationship between a Catholic University and the “institutional” Church? I don’t think so.

Yes, Notre Dame needs to do more. The Administration and University leaders need to embrace and celebrate — publicly and enthusiastically — the work and witness of pro-life students and faculty, of programs like the Center for Ethics & Culture, of pro-life policies and proposals. It should never be possible for a reasonable observer to think that Notre Dame cares passionately about energy conservation but reservedly or half-heartedly about the need — the moral imperative — to use the law (and other policy tools) to protect unborn children.

All that said . . . this is a good thing. I’d like to see Notre Dame’s pro-life critics — that is, those of her critics who recognize her importance and who want her to be what she is called to be — give Fr. Jenkins and this task force (full disclosure: Prof. Brinig, one of the co-chairs, is my friend) the benefit of assuming good faith, welcome and engage their work, and — as needed — charitably call on them to do more . . .