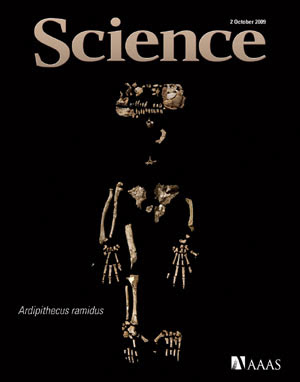 Human exceptionalism received a boost today with the news that human beings apparently did not evolve from apes.  From the story:

The skeleton of an early human who lived 4.4 million years ago shows that humans did not evolve from chimpanzee-like ancestors, researchers reported on Thursday. Instead, the missing link — the common ancestor of both humans and modern apes — was different from both, and apes have evolved just as much as humans have from that common ancestor, they said. The researchers stressed that “Ardi” may now be the oldest known hominid, but she was not the missing link. “At 4.4 million years ago we found something pretty close to it,” said Tim White of the University of California Berkeley, who helped lead the research team.

Here’s how the matter was put in another report about the story:

Researchers concluded that both the human branch and the ape branch of the family tree have evolved significantly from its common ancestor, and chimps can no longer be thought of as a “proxy” for that common ancestor.

I bring this up because some Darwinsists and other assorted materialists have attacked human exceptionalism on the basis that our supposed emergence from the great apes and/or our genetic closeness means that we should not think of ourselves as distinctive. I never thought that was in the least persuasive.  What matters is what we are now, not what might have been millions of years ago or how we got here.  But this report concludes that our common ancestry—still undiscovered—is thrown even further back—with apparently no direct lineage of human beings arising from apes.

It looks like the anti-human exceptionalists will have to go back to the drawing board.
0
Print
Email
Prev Article
Next Article