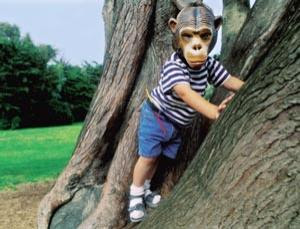 I reported earlier today that scientists have concluded that we did not evolve from apes.  In response, a source sent me a book review that appeared in the New Scientists I had missed.  It turns out that our apparent genetic closeness does not mean that we are that closely related to chimps at all—a meme used often to attack human exceptionalism.  From the a review of the book Not a Chimp:

Take that 98.4 per cent, an oft-repeated figure that has been used to argue that chimps deserve human rights. True, Homo sapiens and Pan troglodytes share an extraordinary amount of genetic similarity - yet humans and mice share almost as much. Complete genomes of both species are enabling researchers to map the chasm between human and chimp, which seems to deepen by the year. A good example is FOXP2, a regulatory gene linked to speech and language disorders in humans. FOXP2 in chimps has barely changed in the 130 million years since primates and mice diverged from their common ancestor. But after humans and chimps split, two key changes accumulated on the human line.

Even greater differences may lurk in the areas of the genome once discounted as “junk” DNA, which don’t make proteins but instead determine gene activity. One recently discovered RNA-coding sequence that may be involved in cerebral cortex development was found to vary little between chimps and chickens, yet humans possess 18 unique changes.

Geneticists are right to home in on differences that affect brain development: nowhere is the gulf between humans and chimps wider than in their mental abilities. Psychologists suggest that the ability to infer the mental states of others may underlie language and culture. Children gradually acquire this capacity, called theory of mind, but evidence for it in chimps is equivocal.

From a scientific perspective, however, Taylor’s polemic takes on a straw man. Most primatologists and psychologists are conservative in their assessments of chimp abilities, and geneticists freely admit how little they know about what separates the two species. Instead, Not a Chimp should be mandatory reading for journalists who often reinforce the general public’s misconception that chimps are practically human.

A lot of what the media reports comes from politicized scientists.  But never mind: Like I said before, with the human/chimp connection falling apart, the human unexceptionalists will have to go back to the drawing board.
0
Print
Email
Prev Article
Next Article