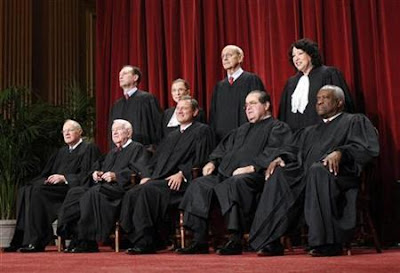 I’m a lawyer—thanks for not holding that against me—and my knowledge of law and the U.S. Constitution has me wondering whether the mandatory purchase requirement or pay a fine under all Obamacare plans passes constitutional muster. I haven’t done a study of the matter, but it strikes me as unlikely.  The commerce clause regulates commerce, it doesn’t require it. Promoting the general welfare is awfully nebulous.  The Constitution is about limiting the power of government, not empowering government to control the people.  Indeed, that is why a constitutional amendment was needed to institute a federal income tax. And Nancy Pelosi’s refusal to even consider the question—“Are you kidding me?”—doesn’t give one confidence that that aspect has been thought out by our benevolent betters in DC.

Now, a column in the Wall Street Journal raises significant doubts. From the column:

The elephant in the room is the Constitution. As every civics class once taught, the federal government is a government of limited, enumerated powers, with the states retaining broad regulatory authority. As James Madison explained in the Federalist Papers: “[I]n the first place it is to be remembered that the general government is not to be charged with the whole power of making and administering laws. Its jurisdiction is limited to certain enumerated objects.” Congress, in other words, cannot regulate simply because it sees a problem to be fixed. Federal law must be grounded in one of the specific grants of authority found in the Constitution.

These are mostly found in Article I, Section 8, which among other things gives Congress the power to tax, borrow and spend money, raise and support armies, declare war, establish post offices and regulate commerce. It is the authority to regulate foreign and interstate commerce that—in one way or another—supports most of the elaborate federal regulatory system. If the federal government has any right to reform, revise or remake the American health-care system, it must be found in this all-important provision. This is especially true of any mandate that every American obtain health-care insurance or face a penalty.

The Commerce Clause has been liberally construed, but it isn’t absolute:

But there are important limits. In United States v. Lopez (1995), for example, the Court invalidated the Gun Free School Zones Act because that law made it a crime simply to possess a gun near a school. It did not “regulate any economic activity and did not contain any requirement that the possession of a gun have any connection to past interstate activity or a predictable impact on future commercial activity.” Of course, a health-care mandate would not regulate any “activity,” such as employment or growing pot in the bathroom, at all. Simply being an American would trigger it

I think the authors should have made their case stronger than this example.  But the problem in doing so may be that the Congress has never been so audacious as to require each one of us to act in the government’s desired way.  It is simply unprecedented:

Since the 1930s, the Supreme Court has been reluctant to invalidate “regulatory” taxes. However, a tax that is so clearly a penalty for failing to comply with requirements otherwise beyond Congress’s constitutional power will present the question whether there are any limits on Congress’s power to regulate individual Americans. The Supreme Court has never accepted such a proposition, and it is unlikely to accept it now, even in an area as important as health care.

I think that’s right—5-4, which tells you how political constitutional jurisprudence has become.  Unless President Obama can bring in more lefties to replace the righties, the mandatory health insurance plan will probably bite the constitutional dust.

Of course, the remedy for that would be a single payer plan—assuming the current crowd still rules the roost.  Indeed, the failure of the individual mandate would become the rationalization for taking that tack.  And that, I think, would be constitutional—just like Social Security.  People would not have to sign up, but virtually everybody would, since it would be the only game in town unless you have the wherewithal to pay cash.
0
Print
Email
Prev Article
Next Article