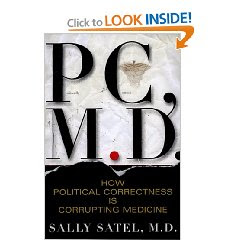 This is what I have been saying: Under Obamacare, “wellness” will be pushed to promote cost reduction.  It won’t work.  After all, that is what HMOs—health maintenance organizations—were supposed to be all about.  But HMO wellness programs didn’t reduce costs all that much. But it will be an excuse for taxes or higher premiums—even though evil underwriting for risk is supposed to be verboten.

To promote wellness, people engaging in unhealthy behaviors are to be punished 0r their proclivities taxed.  Right, I snorted, but only those sufficiently unpopular that the health bullies will not fear running afoul of bad polling.  If an unhealthy behavior is more “acceptable,” there will be no sanction.  I used the example of promiscuity. but apparently that isn’t all. From the story:

According to provisions spelled out in the Senate Finance Committee’s summary of the bill—the so-called “chairman’s mark”—insurance issuers selling policies to individuals could only vary premiums based on three characteristics: tobacco use, age and family composition.

Specifically, it says premiums could vary “by no more than the ratio specified” for each characteristic:

Political underwriting—attacking unpopular smokers but not other, more popular unhealthy activities—leaves out all kinds of behaviors that raise health care costs, but which will not be subjected to higher premiums—like drugs:

Economist Earl Grinols of Baylor University questioned why the bill is singling out tobacco users as opposed to people who engage in other habits that carry health risks. “Why are they talking about tobacco use only, not drug abusers?” asked Grinols. “What about people who choose to do hang gliding and technical rock climbing without ropes? They’re going to have higher medical expenses as well.  To the extent that cocaine users and drug abusers also have higher costs, there’s no question that it’s favoring those types of medical abusers with respect to tobacco,” told CNSNews.com...

Allen St. Pierre, director of the National Organization for Reform of Marijuana Laws agreed that the Senate Finance Committee was being “rather selective” in singling out tobacco users over users of cocaine and marijuana. But St. Pierre said the government is attempting to further a social trend. “It certainly doesn’t get away too far from an existing 20-year trend of government taxing tobacco at every-increasing rates and users of tobacco, so by extension, taxing the health plans or making them less available to people who use tobacco would be consistent with that 20-year trend,” he added. nTobacco has become “politically incorrect,” St. Pierre said.

They forgot obesity, but don’t worry, the lifestyle bureaucrats will soon correct that lapse.

This is the consequence of politicizing health care. The popular will not be punished/rationed. The unpopular will.  That’s politics!
0
Print
Email
Prev Article
Next Article