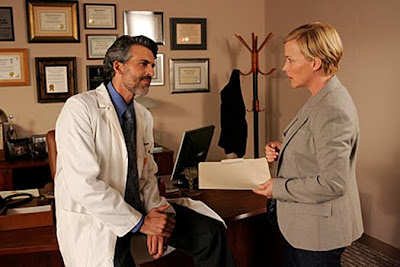 Hollywood loves assisted suicide and euthanasia. Not just as a plot device, but to promote through its various products as a modern, caring, compassionate, and proper policy for society to accept. Perhaps the most notable example was the Clint Eastwood movie Million Dollar Baby, that carried a terrible and explicit message that dead is better than disabled. (Here’s my take published in the Weekly Standard.) Most major network television programs have had clearly pro assisted suicide episodes, including Law and Order, ER, and even Star Trek Voyager.

I have a good radar when a show is heading into that territory. That’s why I cringed last night as Secondhand Smokette and I were watching Medium.  [WARNING: PLOT SPOILER ALERT.) But to my surprise, the episode, called “Pain Killer,” explored the dark side of euthanasia rarely considered by Hollywood writers.  A physician, who had previously saved the psychic lead character Allison’s life (don’t ask), has taken it upon himself to mercy kill her dying friend. She “sees” what happened in one of her psychic dreams and confronts him.  In words that were almost exact quotes from some of the cold, utilitarian justifications uttered by Jack Kevorkian, the doctor tells her it is a professional obligation to decide who lives and who dies, indeed, that even patients don’t necessarily know in such situations, what is best.  Later, Allison’s husband rightly calls him a sociopath. (One of the best jibes I ever heard regarding Kevorkian, said he was a “mass murderer” whose victims came to him.)

Eventually, the doctor murders his boss by simulating a heart attack to cover up his crimes.  When Allison accuses him and notes that the murder had nothing to do with mercy, he breezily asserts that it is important he remain free to save lives, and that the killing was justified even though not a matter of mercy, because he has greater societal value than a pencil pushing bureaucrat.

Now, assisted suicide activists would say that this has nothing to do with their agenda.  They would be right about the murder of the boss plot twist—although some utilitarian philosophers might go along with placing a higher value on the life of someone like a physician over those with lesser social utility.  But non voluntary euthanasia is definitely part of the euthanasia agenda.

The two ideological pillars of euthanasia/assisted suicide are radical individualism and killing as an acceptable answer to suffering. In the second, is a seed that grows into disdain for suffering people, which leads some to eventually cast aside the “choice” angle.  Indeed, each year in the Netherlands (as I explain more fully here), about 800-900 patients who never asked to be euthanized are murdered by doctors. The practice even has a name; “termination without request and consent.”

Illustrating the danger of euthanasia consciousness, these doctors are rarely prosecuted, are never meaningfully punished if they are convicted—two week suspended sentences are typical—and I have not heard of one case in which the murdering doctor even lost his or her medical license. Indeed, the Dutch Medical Association always leaps to their defense, warning darkly that punishing doctors would chill euthanasia practice.

Euthanasia/assisted suicide is a dangerous culture changing movement. How refreshing that a major network television program focused for once on the peril of allowing doctors to be killers as well as healers.