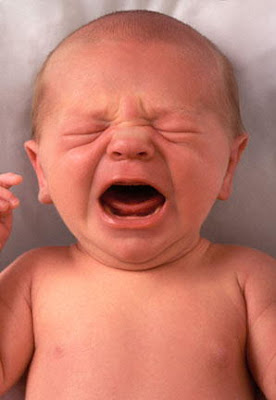 This is an interesting study that belies the notion that fetuses are insentient: Apparently, babies cry in their own languages.  From the story:

From their very first days, the cries of newborns already bear the mark of the language their parents speak, scientists now find. French newborns tend to cry with rising melody patterns, slowly increasing in pitch from the beginning to the end, whereas German newborns seem to prefer falling melody patterns, findings that are both consistent with differences between the languages. This suggests infants begin picking up elements of language in the womb, long before their first babble or coo.

Prenatal exposure to language was known to influence newborns. For instance, past research showed they preferred their mother’s voice over those of others. Still, researchers thought infants did not imitate sounds until much later on. Although three-month-old babies can match vowel sounds that adults make, this skill depends on vocal control just not physically possible much earlier. However, when scientists recorded and analyzed the cries of 60 healthy newborns when they were three to five days old — 30 born into French-speaking families, 30 into German-speaking ones — their analysis revealed clear differences in the melodies of their cries based on their native tongue.