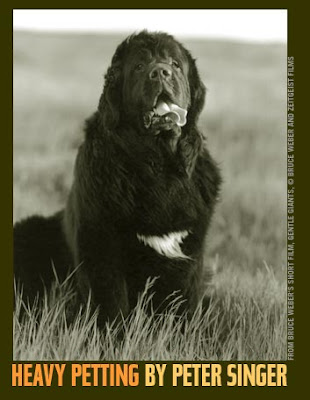 A man has been given three years in jail for having sex with a horse. I feel somewhat sorry for the defendant in this case, who is clearly disturbed. But I do think it is a sufficiently important issue of human exceptionalism that sex with animals should be punished as a crime.  First, it is abuse. But beyond that obvious point, by definition, bestiality denigrates human dignity

On this final note, Peter Singer and I disagree—as we do about nearly everything. In “Heavy Petting,” a review of a book promoting bestiality (warning, the review contains crude imagery, some of which I have edited out in the quote below), Singer wrote:

But sex with animals does not always involve cruelty...At a conference on great apes a few years ago, I spoke to a woman who had visited Camp Leakey, a rehabilitation center for captured orangutans in Borneo...While walking through the camp with Galdikas, my informant was suddenly seized by a large male orangutan, his intentions made obvious...As it happened, the orangutan lost interest...but the aspect of the story that struck me most forcefully was that in the eyes of someone who has lived much of her life with orangutans, to be seen by one of them as an object of sexual interest is not a cause for shock or horror. The potential violence of the orangutan’s come-on may have been disturbing, but the fact that it was an orangutan making the advances was not. That may be because Galdikas understands very well that we are animals, indeed more specifically, we are great apes. This does not make sex across the species barrier normal, or natural, whatever those much-misused words may mean, but it does imply that it ceases to be an offence to our status and dignity as human beings.

Another bioethicist, Jacob Appel, has also defended bestiality, as he took a veiled slap at yours truly:

Opponents of bestiality often describe themselves as advocates of “human exceptionalism” and express the belief that intercourse with animals debases the dignity of human beings by blurring the lines between people and animals. (They fail to explain why sex is unique in this manner–why playing Frisbee with a dog, or eating a corned beef sandwich, does not also blur such boundaries)

Surely Appel understands the profound symbolic and intimacy differences between playing frisbee with a dog and having sexual intercourse with her (or him). Beyond that, I could not disagree with him and Singer more.  Indeed, when a man was killed having sex with a horse in Washington, I supported legislation making such sex acts a crime because bestiality blurs the crucial moral line between humans and animals.  I wrote in the Daily Standard:

Bestiality is so very wrong not only because using animals sexually is abusive, but because such behavior is profoundly degrading and utterly subversive to the crucial understanding that human beings are unique, special, and of the highest moral worth in the known universe—a concept known as “human exceptionalism.”...

MOST PEOPLE take human exceptionalism for granted. They can no longer afford to do so. The great philosophical question of the 21st Century is going to be whether we will knock humans off the pedestal of moral exceptionalism and instead define ourselves as just another animal in the forest. The stakes of the coming debate couldn’t be more important: It is our exalted moral status that both bestows special rights upon us and imposes unique and solemn moral responsibilities—including the human duty not to abuse animals.

Nothing would more graphically demonstrate our unexceptionalism than countenancing human/animal sex. Thus, when Roach’s legislation passes, the law’s preamble should explicitly state that one of the reasons bestiality is condemned through law is that such degrading conduct unacceptably subverts standards of basic human dignity and is an affront to humankind’s inestimable importance and intrinsic moral worth.

Our self image is crucial to how we act and what we countenance.  Human exceptionalism needs to be defended at all levels—including as here, by drawing a line in the sand against base human behavior involving animals.
0
Print
Email
Prev Article
Next Article