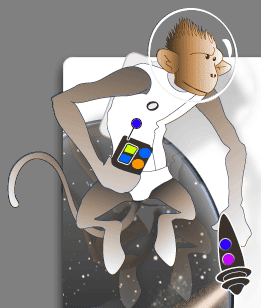 I support necessary medical and scientific experimentation on animals. But I don’t think this experiment is necessary.  From the story:

Nasa is to expose squirrel monkeys to daily radiation doses to help them understand the effects of long space trips on humans. It will be Nasa’s first experiment on primates in decades.

If a manned mission to Mars ever takes place, the human pilots will be outside Earth’s protective magnetic field for several months, unprotected from solar radiation. Little research has been done on this sort of long-term exposure to low doses of radiation. Rats and mice have been exposed to this sort of radiation before, but that gives only a hint of what the effects would be on humans. Eleanor Blakely, a biophysicist at Lawrence Berkeley National Laboratory, said: “Obviously, the closer we get to man, the better.”

The researchers are to pay particular attention to the effects on the monkeys’ central nervous systems and behaviour. The monkeys, previously trained to perform a variety of tasks, will be tested to see how the exposure affects their performance. Jack Bergman, a behavioral pharmacologist at Harvard Medical School’s McLean Hospital in Boston, said: “We realized there was a need for this kind of work. “There’s a long-standing commitment on the part of NASA to deep space travel and with that commitment comes a need for knowing what kinds of adverse effects deep space travel might have, what are the risks to astronauts. That’s not been well assessed.

This experiment seems wildly premature.  We are probably decades from being able to technologically support—much less afford—manned trips to Mars. Indeed, we may not conduct such missions in our lifetimes.  If and when we get closer to actually doing these missions, these experiments might be necessary, and they can be conducted with a better understanding of the actual conditions the astronauts would face based on the technology of the time.

This isn’t to say that there should be no research into the issue. We have had people in space for months at a time in the space station.  Surely, they were exposed to continual radiation and their health can and should be monitored over the coming years.  Surely that information would be more fruitful than these experiments. But even if not, until and unless extended space missions become plausible, I see no reason to put these monkey through the potentially painful consequences of being exposed to radiation.  There may be a time, as I said, to conduct such studies. But that time is not now. After all, one of the duties of human exceptionalism is to not cause animals to suffer for unnecessary or gratuitous reasons.
0
Print
Email
Prev Article
Next Article