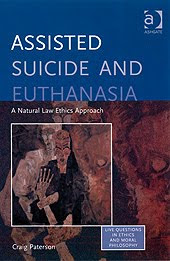 Major changes in the new Senate Obamacare bill from its House counterpart, in the sections involving assisted suicide.  (The bill is actually a gutted and already passed bill from the House—HR 3590—a trick that may be designed to get around the necessity of a conference committee.  More on that in the next post.)  Recall that the House Bill prevented the promotion of assisted suicide in the end of life counseling.  It’s missing altogether from HR 3590. This is the only reference to assisted suicide in the bill, starting at page 364:

That’s it. In other words, it is a conscience clause protecting medical professionals who don’t commit assisted suicide. There is no prohibition on promoting it or having it paid for under the plan.

Why need a conscience clause?  Get this clause under the section 1323 of the bill creating the public option (p. 183), beginning at page 186:

(F) PROTECTING ACCESS TO END OF LIFE CARE.—A community health insurance option offered under this section shall be prohibited from limiting access to end of life care.

If assisted suicide, or even euthanasia, are legally considered forms of “end of life care” in a particular state—as it is now in Oregon, Washington, and Montana—it seems to me that the area’s community health insurance option would be required to provide “access” to it under this clause. How else can the provision be read? And because it would have been passed later in time, this clause could be construed to subsume existing federal law that prevents federal funds from being used in assisted suicide.

None of this is by accident. The next question becomes: Why might that be?  Ideology plays a part, certainly.  But considering all of the emphasis on cost control in the Obamacare debate, this has to also be about money.  Can you think of any “medical treatment” for seriously ill or disabled people than assisted suicide/euthanasia?  The cost of the drugs to kill are only about $100.  Think of the millions that could be saved if expensive treatments never have to be rendered because patients have made themselves dead.
0
Print
Email
Prev Article
Next Article