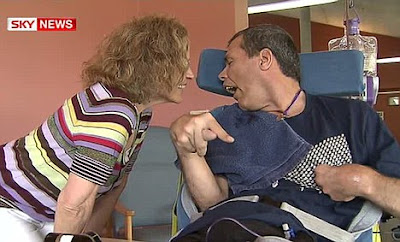 We hear constantly that people diagnosed as being persistently unconscious should be dehydrated to death because they are not “persons,” or are actually “dead”—and so should be available for organ harvesting.  We hear that even if the family resists, futile care theory should permit bioethics committees to impose unilateral withdrawal.  And we hear this even as repeated studies demonstrate that 40 or more percent of patients diagnosed as PVS really aren’t.

But the dehydrating lobby merely reply, “That’s even more reason to do it! Imagine the suffering!” Well, imagine you are in the locked in state (awake and aware but unable to communicate) and hear doctors telling your family to kill you.  Now that is terror.

But there are abundant reasons to treat people with profound cognitive disabilities as fully human beings.  First and foremost, because they are us. Second, because we don’t know enough about how the brain works to know that there won’t be some regeneration to permit eventual restoration of some function.  But also, because there is always hope.

Case in point: We hear from time-to-time, for example, that a person in PVS awakened.  And now in Belgium [NOTE, this corrects original post that incorrectly stated this happened in the UK], a  man misdiagnosed as unconscious for 23 years is now telling how he was fully aware all along.  From the story:

A car crash victim has spoken of the horror he endured for 23 years after he was misdiagnosed as being in a coma when he was conscious the whole time. Rom Houben, trapped in his paralysed body after a car crash, described his real-life nightmare as he screamed to doctors that he could hear them - but could make no sound. ‘I screamed, but there was nothing to hear,’ said Mr Houben, now 46, who doctors thought was in a persistent vegatative state. ‘I dreamed myself away,’ he added, tapping his tale out with the aid of a computer.

Doctors used a range of coma tests before reluctantly concluding that his consciousness was ‘extinct’. But three years ago, new hi-tech scans showed his brain was still functioning almost completely normally. Mr Houben described the moment as ‘my second birth’. Therapy has since allowed him to tap out messages on a computer screen.

Houben is here today only because he wasn’t dehydrated to death.  There is no doubt he went through a horrendous experience, but thanks to treating him as a fully equal human being by caring for him all those years and giving him tests late into his disability—explicitly refused to Terri Schiavo—he is here today to tell tale and live the rest of his life.

And for goodness sake, whatever you believe about these issues, don’t talk in the presence of PVS or other apparently unconscious patients as if they aren’t there. Rather, always treat such people as if they can hear you, because sometimes they can.
0
Print
Email
Prev Article
Next Article