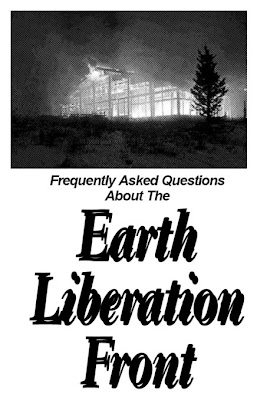 A court decision in a case against the Earth Liberation Front (ELF) describes why its members (and, by extension animal liberation criminals such as, ALF, SHAC, etc.) deserve to be called terrorists.  From the 7th Circuit Court of Appeals decision U.S. v Christianson,  starting at page 12 (no link, email me privately if you want PDF):

ELF’s members take their activism to unconscionable levels: since ELF’s inception in 1987, its members have been responsible for bombings, arson, vandalism, and a host of other crimes. In fact, between 2000 and 2005, 43 of the 57 reported terrorist attacks committed on American soil were done by ELF members or their sister organization, the Animal Liberation Front. ELF’s terror attacks have caused over fifty million dollars in damage to public and private property, including the arson of condominium complexes, multiple university research facilities, a ski resort, logging facilities, a high-voltage energy tower, and almost a score of other pieces of private property.5 A perfunctory survey of some of the cases involving ELF shows the breadth of its destructive force...These people are not peaceful protestors...

Beyond the damage inflicted, it is impossible to calculate how these acts would have intimidated the workers of the Rhinelander facility. Arriving at work the next day, employees were greeted with “F*** U USFS” and “F*** TREE BIOTECH” spray-painted on their work vehicles. And as the employees surveyed the facility, they discovered that valuable experiments they spent decades working on had been destroyed. The employees would be familiar with ELF, and the communique about the attack the next day foreshadowing “more appropriate action” would likely make employees think twice before they stayed late at work or came in on the weekend to finish some project. Such behavior is not in the same genus of non-destructive and non-violent protests that can be honestly described as well meaning but misguided.


Simply put, a terrorist is “any one who attempts to further his views by a system of coercive intimidation.” Nos. 09-1526 & 09-1615 13 XVII Oxford English Dictionary 821 (2d ed. 1989); accord Webster’s Third New International Dictionary 2361 (1981) (“an advocate or practitioner of terror as a means of coercion.”)...The Guidelines provide a practical definition for what constitutes an act of terrorism, and thereby establishes a very workable definition of who is a terrorist. It looks at the crime involved and the perpetrator’s motive. If the act is among the litany of crimes listed in § 2332b(g)(5)(B), which include a bevy of the most harmful and odious acts in the criminal code, including everything from murder and torture to the destruction of government property, and it was “calculated to influence or affect the conduct of government by intimidation or coercion, or to retaliate against government conduct,” then it is a federal crime of terrorism.

And these people have the nerve to compare themselves to Martin Luther King and Gandhi, and their crimes as “free speech.”  The court is right: Terrorism is terrorism and its perpetrators should be treated as such.
0
Print
Email
Prev Article
Next Article