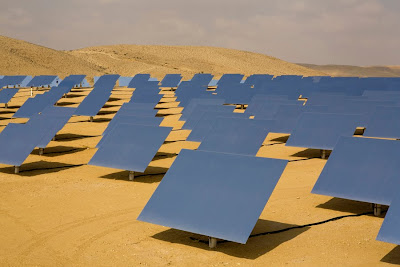 If the world was really coming to an end from global warming, there would be no NIMBY (not in my back yard) rejections of alternative energy projects, and more leadership by example—notably unlike the approach of Al Gore.  Now Senator Diane Feinstein won’t let a solar and wind farm be built in the middle of nowhere in California’s Mojave Desert.  From the story:

Senator Dianne Feinstein, D-Calif., who chairs the Senate subcommittee that oversees the Interior Department, has scuttled plans to build 13 multi-million dollar solar plants and wind farms on a million acres in California’s Mojave Desert proposed as a national monument. Feinstein’s move will severely complicate her state’s quixotic effort to obtain a third of its electricity from renewable sources by 2020.

The desert land was bought for nearly $45 million in private funds and $18 million in federal funds by an environmental group, which then donated it to the federal government for the purpose of conservation. In 2005, however, President Bush ordered that renewal energy production be fast-tracked on all public lands including the Mojave, which is among the sunniest in the nation. “This is arguably the best solar land in the world, and Senator Feinstein shouldn’t be allowed to take this land off the table without a proper and scientific environmental review,” said Robert F. Kennedy Jr., a partner in a venture capital firm that invested in BrightSource, a developer forced to cancel a large solar project in the monument area.

I’m not sure who Bobby Kennedy is to talk: He (along with other rich Cape Cod types) rejected a wind farm near the Kennedy compound.  Bad views are for others, particularly if they drawl, don’t you know. Then again, unlike the Massachusetts gig, he would have made money in the Mojave.

As a born and bred Californian familiar with that part of the desert, which is very hot and inhospitable, I think wind and sun electricity generating projects would be a splendid use of that land.  Feinstein’s refusal to allow it to go through is clear evidence that she doesn’t think we really face a climate crisis of Biblical proportions.  Indeed, since it is apparently so unserious, she has no reason to vote for cap and trade.
0
Print
Email
Prev Article
Next Article