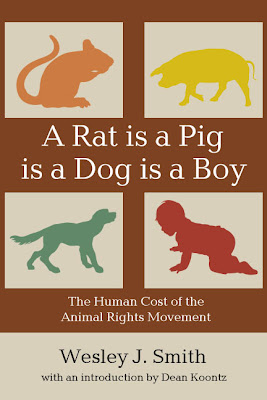 The subtitle of my upcoming book, A Rat is a Pig is a Dog is a Boy (taken from PETA’s Ingrid Newkirk’s most famous quote), is The Human Cost of the Animal Rights Movement.  That cost is both real and harmful, as evidenced by a story of important research on anthrax not being conducted for fear of animal rights terrorism. From the story:

Last week a commotion erupted over a canceled anthrax project at Oklahoma State University (OSU), Stillwater. The National Institutes of Health had agreed to fund the study, which involved creating an animal model of anthrax infection in baboons, and the university’s animal use and care committee had given it the green light. But OSU President Burns Hargis decided that the project would not be allowed on campus, for reasons that weren’t immediately clear.

Hargis made the decision based on several factors, OSU’s vice president for research and technology transfer, Stephen McKeever, told ScienceInsider on Friday. “The issue he was mostly concerned about was that he really did not want to attract controversy from the violent elements of various animal rights groups. He did not want to put OSU in that spotlight and so unnecessarily distract from or interfere with current research.” Although McKeever says no specific attacks or threats against OSU factored in the decision, attacks by animal rights extremists have been on the rise in the United States in recent years.

That’s the point of terrorism, to use fear as a cudgel to affect policy. This is just one example of the harm being done by animal rights terrorism, about which the general movement—with notable exceptions, such as Gary Francione—remains mostly silent or tacitly in support. That is why I no longer think of animal rights as a peaceable movement.
0
Print
Email
Prev Article
Next Article