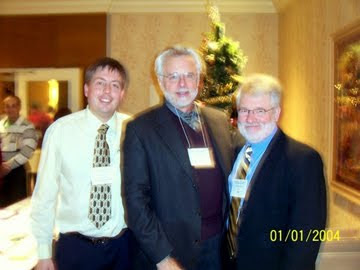 I was planning on commenting about the reported increase in Dutch euthanasia deaths. But the indefatigable Alex Schadenberg of the Euthanasia Prevention Coalition (to the left of the old guy in the center as you look at the photo), beat me to it. From his blog:

Actually, some studies show that 50% go unreported.  But back to Alex:

In order to have an accurate picture of the number of deaths that are directly and intentionally caused by physicians in the Netherlands, you need to know that assisted suicide is a separate category in the Netherlands. Therefore you must needs to be added the assisted suicide deaths to the number of euthanasia deaths. The number of assisted suicide deaths was not reported in the article but it is approximately 400 deaths each year. Another category of deaths is deaths without explicit consent. The most recent government report (2005) showed that the number of deaths without explicit consent was approximately 550. Many of the 550 deaths are directly and intentionally caused by the physician but not reported as euthanasia because they lacked consent.

Isn’t that amazing? The number of euthanasia deaths are under-reported because non voluntary and involuntary euthanasia don’t count as euthanasia because the patient didn’t consent!

And that isn’t all. As Alex notes, these statistics don’t include the unduly high numbers of terminal sedation deaths—palliative sedation used not as a legitimate pain control technique but as back door euthanasia—infanticide, and etc.   I would also point out that Dutch doctors refer patients they don’t want to euthanize with how-to-commit-suicide information.

Here’s the bottom line: The Dutch prove that once euthanasia consciousness is accepted, there is ultimately no real control.
0
Print
Email
Prev Article
Next Article