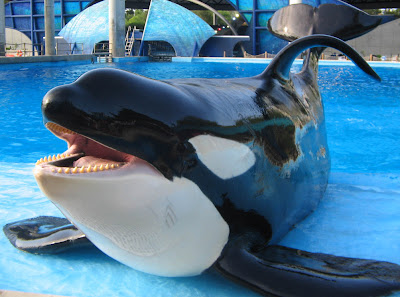 When an orca drowned one of his trainers at Orlando’s Sea World, nobody discussed “punishing” or otherwise holding him morally accountable.  Indeed, the very notion is nonsensical, as a consequence of which, the question about “what to do” has properly revolved around how to best promote animal welfare and protect human safety.  From the story:

Brancheau’s death has reignited calls for Tillikum and other captive killer whales to be released or put in ocean pens where they could communicate in normal whale fashion, something that’s impossible in a concrete tank. However, SeaWorld officials say Tillikum could not manage in the wild and even advocates for whale freedom believe it would be difficult to return him to Iceland. “We don’t know who his family is and it would be far too expensive to retire him to Iceland,” said Michael Harris, president of Seattle-based Orca Conservancy.

However, it could be possible to retire him to a sea pen at Neah Bay, Wash., and then partner with academic institutions to create long-term study opportunities, Harris said. “He would still be a huge safety concern for his caretakers,” he said. “Then again, perhaps he’d become far less dangerous if introduced to the natural seawater and ocean walks.”

Imagine if a human had done the same thing: Arrest, trial, perhaps life in prison or the death penalty would be the outcome for the murderer.  But animals are not moral agents, and therefore, they cannot commit murder.

That is a distinction between us and animals that makes a real difference.  Regardless of the grandeur of any animal—and killer whales, actually dolphins, are both awesome and intelligent—human exceptionalism can’t be denied.  Our moral agency distinguishes us from all other known life forms in the history of the universe.  That matters from an ethical standpoint, both justifying uniquely human rights and imposing distinct duties that only can be required of human beings.

Those who claim otherwise, it seems to me, do so in pursuit of agendas that cannot be achieved without pretending HE is not real.  But that doesn’t change the unique nature of our natures.
0
Print
Email
Prev Article
Next Article