The Mardi Gras season in New Orleans starts weeks in advance of today’s actual celebration, and is traditionally known as a time for people to celebrate excess in the days leading up to Lent—forty days of fasting.

In some ways, though, Mardi Gras has become a celebration of vice before forty days of, well, supposed virtue. It’s one of those fun curiosities about the culturally Christian world: People eat and drink gluttonously as a sort of religious observance.

One of the ways vice is simultaneously vilified and celebrated is on the floats that parade through New Orleans, filled with masked people who throw beads and toys to the passersby. In one parade this year, spectators enjoy a hilarious twenty-float lineup of what one might call winners of the Greatest Vices of the Year: Senator Edwards, Senator Vitter, and Governor Sanford are spotlighted on a lust-themed float as “Politicians Gone Wild!”; New Orleans Mayor C. Ray Nagin is painted “asleep at the wheel,” accused of negligence and bad time management on a sloth-themed float; and Bernard Madoff appears on a pyramid as “Pharaoh Made-off” on a greed-themed float that describes him as “the modern-day Judas who was traitor to his own tribe for only 20 million pieces of silver.”

Among these scandalous float figures is President Barack Obama. 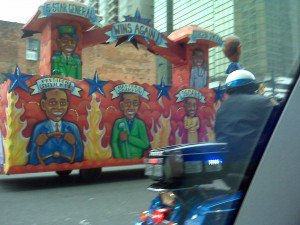 On a pride-themed float called “Experiment of His Own Power,” Obama is compared to “The Proud One” of Dante’s Inferno, posing with his Nobel Peace Prize medal, next to several other representations of him—along with Oscar and Heisman Trophy awards, he appears as a five-star general, president of General Motors, and as the “healthcare-expert” Surgeon General—all engulfed by the flames of hell.

Is this the rant of a few comic float-makers, or is it a sign of a graver discontent Obama faces from the American people? For many, it’s looking grim: The effect his leadership has had on Katrina recovery-efforts, for instance, is at least as questionable as the promised improvements in foreign policy and economic stimulus.

The final float of the “not-so-divine comedy” features “Paradisio”—a montage of what, for New Orleanians, would happen when “hell freezes over”—what seems perfect and far from reality. “Lowest Crime Rate in the Nation!” it boasts. “Category-Five Flood Protection!” it decries. “Streets 100 Percent Repaired!” And among these messages it reads “Superbowl Champs”—a prediction the float-makers couldn’t have known would be accurate when they labored over the designs months before.

Indeed, all is not lost. There are small blessings that accompany us on these trials of earthly life, and this one’s for New Orleans.