After examining the data on 210 million public profiles on Facebook, Pete Warden discovered some fascinating clusters of connections . His visualization of the information, which tracks connections between places that share friends, reveals that groups form strong online bonds locally but have few contacts outside their particular cluster. 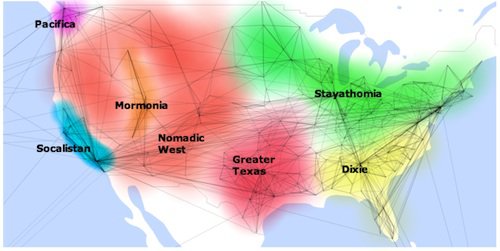 
The only region that’s completely surrounded by another cluster, Mormonia mostly consists of Utah towns that are highly connected to each other, with an offshoot in Eastern Idaho. It’s worth separating from the rest of the West because of how interwoven the communities are, and how relatively unlikely they are to have friends outside the region.

It won’t be any surprise to see that LDS-related pages like Thomas S. Monson, Gordon B. Hinckley and The Book of Mormon are at the top of the charts. I didn’t expect to see Twilight showing up quite so much though, I have no idea what to make of that! Glenn Beck makes it into the top spot for Eastern Idaho.
(The connections to Twilight are likely due to the fact that the author, Stephanie Meyer, is a Mormon who acknowledges that her faith has influenced her work.)

The results of Warren’s analysis are intriguing, though probably not too surprising. Unlike areas of the internet where interaction occurs almost solely online (e.g., blog comments, forums, Twitter), Facebook connections are predominantly comprised of offline friends and acquaintances. For instance, I follow hundreds of people on blogs and Twitter but none of them include the dozens of friends from high school, college, and the military that I connect with on Facebook.

What this data may reveal is that Facebook is qualitatively different from other online media. While the others are all characteristic of the internet, Facebook appears to be an aggregate of intranets . Rather than adding to the disintegration of local communities, Facebook may simply be providing them an online presence.