After a brutal round of upsets, blowouts, and close calls we have narrowed our list of 64 in half. 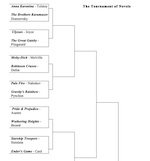 [/caption] Here’s some highlights from Round 1 :

The Upsets: It was Bloomsday to Doomsday for Ulysses . The Irish giant, often called the Greatest Novel of All Time, was felled by the preppie American Gatsby . Another American, Huckleberry Finn , outwitted theSpanish Don Quixote , often considered the first novel. But while individual Americans triumphed, Passos’ U.S.A got sucked into a slough of despond and lost the race to the humble Pilgrim’ s Progress .

The Blowouts: Atlas Shrugged must have “gone Galt” because it barely showed up in the competition against powerhouse Lord of the Rings . And the The Stand proved it wasn’t able to withstand The Plague of existential angst; King made a horrific showing against Camus.

The Nail-biters: Alice made a wonderful effort but wasn’t swift enough to outpace Gulliver’s Travels . In the second closest match-up of the round, Lewis Carroll’s fantastic tale lost by 14 votes. The closest match-up? That very last bracket: Although Fahrenheit 451 kept the heat on, the book got caught up in Charlotte’s Web and lost by a mere 12 votes.

So who will make it into the Sweet 16? Decide now by casting a vote for your favorites. Each round of voting, one round per day for the next six weekdays, will begin at 9:00 am and end at midnight.