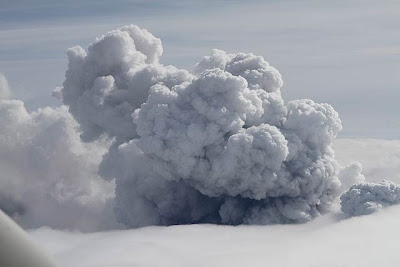 I was going to joke that someone would say the current volcano in Iceland was caused by global warming. But as I always say, you can’t get ahead of them—if you say something sarcastically, someone will make the same claim seriously.

For example, I used to kid to human unexceptionalists who deny the reality of species distinctions between us and animals, that if they want to get reductionist, do it right: We are made of carbon molecules and so are carrots, hence, we are no different from carrots.  Then, Switzerland created the intrinsic value of plants and a big brained ethics committee used that very concept—our similarity with plants at the molecular level—to justify granting intrinsic dignity to individual plants.

Along this line, some scientists are now claiming that global warming could cause volcanoes to erupt, although probably not this volcano. From the story:

A thaw of Iceland’s ice caps in coming decades caused by climate change may trigger more volcanic eruptions by removing a vast weight and freeing magma from deep below ground, scientists said on Friday. They said there was no sign that the current eruption from below the Eyjafjallajokull glacier that has paralysed flights over northern Europe was linked to global warming. The glacier is too small and light to affect local geology.

Well, that’s a relief. But in the future, we may not be so lucky:

“Our work suggests that eventually there will be either somewhat larger eruptions or more frequent eruptions in Iceland in coming decades,” said Freysteinn Sigmundsson, a vulcanologist at the University of Iceland. “Global warming melts ice and this can influence magmatic systems,” he told Reuters. The end of the Ice Age 10,000 years ago coincided with a surge in volcanic activity in Iceland, apparently because huge ice caps thinned and the land rose. “We believe the reduction of ice has not been important in triggering this latest eruption,” he said of Eyjafjallajokull. “The eruption is happening under a relatively small ice cap.” Carolina Pagli, a geophysicist at the University of Leeds in England, said there were risks that climate change could also trigger volcanic eruptions or earthquakes in places such as Mount Erebus in Antarctica, the Aleutian islands of Alaska or Patagonia in South America

Everybody wants to get into the act. So, now, I guess, we can add VOLCANIC ERUPTIONS! to the PLANET KILLING! consequences of global warming.

But then again, don’t volcanic eruptions cause global cooling?  So, maybe it is just the living Gaia engaging in a little self healing to bring balance back to her bodily systems.

Update: This post at Watts Up With That asserts that global warming that resulted in smaller glaciers would lead to less destructive volcanic eruptions in Iceland.  Whichever way it is—it’s all hypothoses—should have zero impact on public policy.
0
Print
Email
Prev Article
Next Article