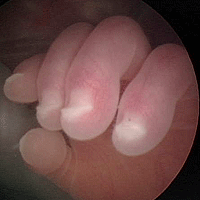 Nebraska has outlawed abortions after 20 weeks on the grounds that by then, the fetus has developed the structures necessary to feel pain.  From the story:

Gov. Dave Heineman of Nebraska signed a law on Tuesday banning most abortions 20 weeks after conception or later on the theory that a fetus, by that stage in pregnancy, has the capacity to feel pain. The law, which appears nearly certain to set off legal and scientific debates, is the first in the nation to restrict abortions on the basis of fetal pain.

Abortion opponents praised the law and said it was justified by medical evidence gained since Roe v. Wade was decided in 1973. Abortion rights advocates said that the measure was unconstitutional, and that the motive behind it was to set off a challenge to legalized abortion before the United States Supreme Court.

But this means some women will die for wont of an abortion!  Nope:

The new law grants exceptions only in cases of medical emergency, the pregnant woman’s imminent death, or a serious risk of “substantial and irreversible physical impairment of a major bodily function,” a provision experts interpreted as an effort to exclude an exception based on a woman’s mental health.

I am not an expert in abortion  jurisprudence.  But, it has always seemed to me that viability is an ethical line that should be the outer limit for permitting abortion (except in extreme circumstances).  Once that point is reached, the biological nonsense many use to support abortion rights—that a fetus isn’t “human”—becomes entirely unsupportable. Indeed, the law has never said that an unwilling mother has a right to a dead fetus, but that she has the right to control her body.  It seems to me, that if she doesn’t want to be pregnant anymore and the baby is viable, the child should be delivered, not killed, and then put up for adoption if she doesn’t wish to raise her child.  That would permit her to terminate her pregnancy—a constitutional right, according to the Supreme Court—and save the baby’s life at the same time.

So, Nebraska’s new law seems entirely reasonable to me, particularly since 20 weeks is potentially (barely) within the potential viability time period.   And if fetuses can feel the pain of being torn apart in utero or cooked in saline—I don’t know the science of fetal pain—that is even more reason to protect later term fetuses from an agonizing destruction.

No other right is absolute—even those expressly stated in the U.S. Constitution and not based on “penumbras.” Abortion shouldn’t be either.
0
Print
Email
Prev Article
Next Article