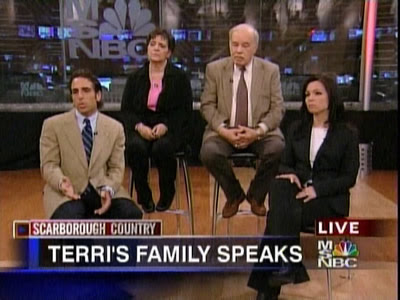 Michael Schiavo has threatened to sue Terri Schiavo’s family because they named their non profit after her—the “Terri Schindler Schiavo Foundation.”  (MS claims he owns the name. ) And, true to form, an ever compliant media fronted his cause with an unfair attack on the family.  From the story:

What Michael Schiavo “believes” is irrelevant and beside the point.  Had the reporters wanted to find out the kind of help the foundation offers others, producers could have called me or a myriad of others active in this field, who are quite aware of the selfless giving and effort each surviving member of Terri’s family offers to others.  Indeed, I have personal knowledge of case after case in which the Schindlers worked selflessly—and without financial compensation of any kind—to assist family members save their cognitively disabled loved ones from suffering the same dehydration fate as Terri.  The Lauren Richardson food and fluids dispute and the Andrea Clarke futile care case are just two that come to mind.

And as for profiteering—Bobby Schindler’s salary is $37,500 annually, and all speaking fees he receives go to the foundation.  His sister Suzanne, makes less and is 14 months in arrears in receiving her compensation.  It is also worth noting, that after receiving complaints, the IRS investigated the foundation and gave it a clean bill of health in 2008.

The hatred of this family is pathological and obsessive.

On a personal note: I know Bobby Schindler very well and consider him one of the most decent human beings I have ever met.  His sister Suzanne is a peach, and mother Mary doesn’t have a vindictive or nasty bone in her body.  Father Bob gave everything he had to save his daughter’s life, and seeing her die slowly by intentional dehydration when the family was prepared to love and care for her the rest of her life, destroyed his health and eventually took his life.  I stand wholeheartedly and unreservedly with the Schindler family and against the continual calumny mounted against them.
0
Print
Email
Prev Article
Next Article