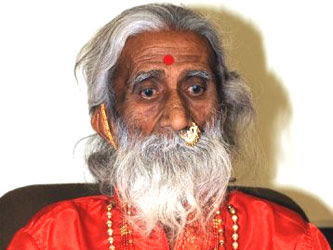 This could be a hoax, a mistake, or bad observation.  But if it isn’t, it means that science does not truly understand human beings or our exceptional capacity to remake reality, or perhaps, tap into realities beyond testable comprehension.  From the story:

An 83-year-old Indian holy man who says he has spent seven decades without food or water has astounded a team of military doctors who studied him during a two-week observation period. Prahlad Jani spent a fortnight in a hospital in the western India state of Gujarat under constant surveillance from a team of 30 medics equipped with cameras and closed circuit television. During the period, he neither ate nor drank and did not go to the toilet. “We still do not know how he survives,” neurologist Sudhir Shah told reporters after the end of the experiment. “It is still a mystery what kind of phenomenon this is.”

The doctors’ response, it seems to me, illustrates the shortcomings of the purely scientific approach in these kinds of circumstances:

Jani has since returned to his village near Ambaji in northern Gujarat where he will resume his routine of yoga and meditation. He says that he was blessed by a goddess at a young age, which gave him special powers. During the 15-day observation, which ended on Thursday, the doctors took scans of Jani’s organs, brain, and blood vessels, as well as doing tests on his heart, lungs and memory capacity. “The reports were all in the pre-determined safety range through the observation period,” Shah told reporters at a press conference last week. Other results from DNA analysis, molecular biological studies and tests on his hormones, enzymes, energy metabolism and genes will take months to come through. “If Jani does not derive energy from food and water, he must be doing that from energy sources around him, sunlight being one,” said Shah. “As medical practitioners we cannot shut our eyes to possibilities, to a source of energy other than calories.”

To be sure, these potential causes should be investigated—as seemingly improbable as they are.  The experiment should be repeated with international observers to prevent bad technique.  But there are other possible explanations for a phenomenon that would seem to defy all known scientific laws and theories. Again, assuming this isn’t a hoax, it could also be literally a case of mind over matter—or even, evidence of the supernatural—neither of which are to ever be acknowledged in the purely materialistic scientific understanding.

This is the second time, the yogi has been observed by doctors.  Still, one response fr0m the science sector is to demand longer periods of observation.  From Live Science’s “Bad Science” column:

Reports claim that Prahlad Jani “has now spent six days without food or water under strict observation and doctors say his body has not yet shown any adverse effects from hunger or dehydration.” Assuming the claim is true — and it’s not clear just how strict the observation is — Jani’s inedia so far remains unproven. If he really doesn’t need food or water, he should be under close observation for months or years to prove it. Given that he claims not to have consumed anything since World War II, this shouldn’t be a problem.

That sounds right.  But if anyone of us were to go totally without hydration for two weeks, we would either be dead or very close to it.

I am not saying I believe this. But I do recognize that “things” sometimes happen that can’t be explained scientifically nor repeated to pass scientific muster.  And in these few and far between cases—by refusing to recognize that there may be more things in heaven and earth than dreamt of in the scientific philosophy (to paraphrase Shakespeare)—science may actually prevent itself from fully comprehending reality.
0
Print
Email
Prev Article
Next Article