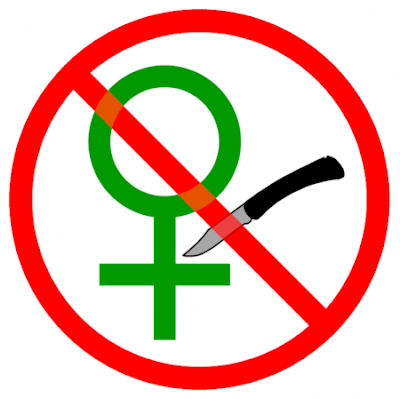 The ongoing deprofessionalization of American medicine was furthered by a just released opinion of the Committee on Bioethics of the American Academy of Pediatricians, which opined that female genital mutilation is wrong—gee, really?—but that pediatricians should, perhaps, be allowed to give a symbolic “nick” to prevent more extensive harm to the girl by parents taking her to the home country.  The entire documents reeks of cultural relativism and terminal nonjudgmentalism.

First, the report objects to using the term “mutilation.” From the report, “Ritual Genital Cutting of Female Minors:”

The language to describe this spectrum of procedures is controversial. Some commentators prefer “female circumcision,” but others object that this term trivializes the procedure, falsely confers on it the respectability afforded to male circumcision in the West, or implies a medical context.4 The commonly used “female genital mutilation” is also problematic. Some forms of FGC are less extensive than the newborn male circumcision commonly performed in the West. In addition, “mutilation” is an inflammatory term that tends to foreclose communication and that fails to respect the experience of the many women who have had their genitals altered and who do not perceive themselves as “mutilated.” It is paradoxical to recommend “culturally sensitive counseling” while using culturally insensitive language. “Female genital cutting” is a neutral, descriptive term.

Ugh!  But whether we call it mutilation or cutting, doctors should not to be “neutral” about a barbaric practice that has no place in a free society. We need to condemn it unequivocally and prevent it from happening here, a matter already mandated in the law, which makes this “compromise” so unnecessary:

In the United States, federal legislation in 1996 criminalized the performance of FGC by practitioners on female infants and children or adolescents younger than 18 years and mandated development of educational programs at the community level and for physicians about the harmful consequences of the practice. Various state laws exist as well.

Countries that have refused any compromise have seen the practice abandoned by immigrant communities:

Many anti-FGC activists in the West, including women from African countries, strongly oppose any compromise that would legitimize even the most minimal procedure. There is also some evidence (eg, in Scandinavia) that a criminalization of the practice, with the attendant risk of losing custody of one’s children, is one of the factors that led to abandonment of this tradition among Somali immigrants.

That lesson is lost on the bioethics committee—which scandalously equates male circumcision—that does not harm function and has actual health benefits—with female genital cutting:

The American Academy of Pediatrics policy statement on newborn male circumcision expresses respect for parental decision-making and acknowledges the legitimacy of including cultural, religious, and ethnic traditions when making the choice of whether to surgically alter a male infant’s genitals. Of course, parental decision-making is not without limits, and pediatricians must always resist decisions that are likely to cause harm to children. Most forms of FGC are decidedly harmful, and pediatricians should decline to perform them, even in the absence of any legal constraints. However, the ritual nick suggested by some pediatricians is not physically harmful and is much less extensive than routine newborn male genital cutting. There is reason to believe that offering such a compromise may build trust between hospitals and immigrant communities, save some girls from undergoing disfiguring and life-threatening procedures in their native countries, and play a role in the eventual eradication of FGC. It might be more effective if federal and state laws enabled pediatricians to reach out to families by offering a ritual nick as a possible compromise to avoid greater harm.

Female genital mutilation is designed to prevent women from experiencing sexual pleasure.  Pure and simple, it intends to subjugate them and deny their equal dignity—and is hence, a frontal attack on human exceptionalism.

This opinion is a craven act of cultural relativism, and hence, a first step  toward a total collapse of principle on the issue.  Moreover, it furthers the trend toward making doctors technocrat order takers rather than professionals. More urgently, cutting girls’ genitalia is abuse—even making a small and medical unnecessary incision—as if that will satisfy families who want to destroy a girl’s sexuality to keep here eligible for marriage, in any event.  Doctors who learn of plans to cut girls—or who see evidence of mutilations—should report families to authorities as they would other abuse.  Zero tolerance.
0
Print
Email
Prev Article
Next Article