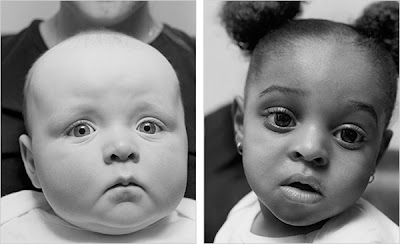 The New York Times Magazine has a long and interesting article today about the moral life of babies.  The story’s main thesis, after establishing evidence for a rudimentary infant morality—such as babies preferring “good guy” puppets, I can’t do the evidence justice in a blog entry—is to refute suggestions—which are treated respectfully—that human morality is evidence for a divinity, as opposed to purposeless evolution.  But that matter is of no consequence to us here at SHS.

For our purposes here, regardless of the why and how of it, this research illustrates how human beings are by inherent nature, moral beings.  This moral capacity is intrinsic to our very existence, and is one of the primary characteristics that distinguish us from—and elevate  us above—all other known forms of life.

Babies were once thought to be so many sociopaths. From the article by Yale psychologist Paul Bloom:

Why would anyone even entertain the thought of babies as moral beings? From Sigmund Freud to Jean Piaget to Lawrence Kohlberg, psychologists have long argued that we begin life as amoral animals. One important task of society, particularly of parents, is to turn babies into civilized beings — social creatures who can experience empathy, guilt and shame; who can override selfish impulses in the name of higher principles; and who will respond with outrage to unfairness and injustice. Many parents and educators would endorse a view of infants and toddlers close to that of a recent Onion headline: “New Study Reveals Most Children Unrepentant Sociopaths.” If children enter the world already equipped with moral notions, why is it that we have to work so hard to humanize them?

A growing body of evidence, though, suggests that humans do have a rudimentary moral sense from the very start of life. With the help of well-designed experiments, you can see glimmers of moral thought, moral judgment and moral feeling even in the first year of life. Some sense of good and evil seems to be bred in the bone. Which is not to say that parents are wrong to concern themselves with moral development or that their interactions with their children are a waste of time. Socialization is critically important. But this is not because babies and young children lack a sense of right and wrong; it’s because the sense of right and wrong that they naturally possess diverges in important ways from what we adults would want it to be.

The authors note that every society develops a morality:

...people everywhere have some sense of right and wrong. You won’t find a society where people don’t have some notion of fairness, don’t put some value on loyalty and kindness, don’t distinguish between acts of cruelty and innocent mistakes, don’t categorize people as nasty or nice...

The morality of contemporary humans really does outstrip what evolution could possibly have endowed us with; moral actions are often of a sort that have no plausible relation to our reproductive success and don’t appear to be accidental byproducts of evolved adaptations. Many of us care about strangers in faraway lands, sometimes to the extent that we give up resources that could be used for our friends and family; many of us care about the fates of nonhuman animals, so much so that we deprive ourselves of pleasures like rib-eye steak and veal scaloppine. We possess abstract moral notions of equality and freedom for all; we see racism and sexism as evil; we reject slavery and genocide; we try to love our enemies. Of course, our actions typically fall short, often far short, of our moral principles, but these principles do shape, in a substantial way, the world that we live in.

The reason is that humans—and humans alone—develop and live moral lives—is that the capacity is inbuilt within us (again, by whatever mechanisms or causes), without which we couldn’t be any more taught moral reasoning or ethical imperatives than can animals (my emphasis):

Babies possess certain moral foundations — the capacity and willingness to judge the actions of others, some sense of justice, gut responses to altruism and nastiness. Regardless of how smart we are, if we didn’t start with this basic apparatus, we would be nothing more than amoral agents, ruthlessly driven to pursue our self-interest. But our capacities as babies are sharply limited. It is the insights of rational individuals that make a truly universal and unselfish morality something that our species can aspire to.

Interesting that he thinks unselfish morality is the highest morality.  But I digress.   Bloom could have added, that developing such a morality is an unapproachable goal for other species in the known  universe.  Yes indeed: Humans are exceptional!  What I don’t understand is the energy and raw emotionalism invested into denying that truth.
0
Print
Email
Prev Article
Next Article