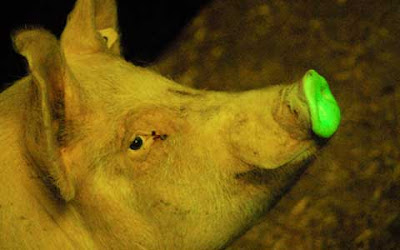 Animal research is crucial to the quest to find treatments for the worst human illnesses.  Toward this end, UK scientists are genetically altering pigs so that they will be born with currently incurable human diseases so that they can be used in drug research looking for effective treatments.  From the story:

SCOTTISH scientists are creating pigs that are genetically modified to suffer from incurable human diseases – so they can be used by drug companies to test new therapies. The team of researchers is trying to produce pigs which are diseased with the lethal lung condition cystic fibrosis and an eye disease that leads to blindness in humans, The Scotsman has learned. The highly controversial research is being carried out at the Roslin Institute in Edinburgh, famous for creating Dolly the cloned sheep. If the team is successful, the diseased animals would be used by drug companies to test potential new gene therapies for the conditions...In a frank interview with The Scotsman, Dr Bruce Whitelaw, head of developmental biology at the Roslin Institute, admitted he had struggled with the idea of creating diseased animals purely to try to benefit humans. “We are saying we will make these animals sick purely for our benefit,” he admitted.  However, he believes his team has a “moral right” to give the technique a try.

It might even rise to the level of a duty.  This is potentially important work that could—not will, but could—tremendously benefit humankind.  But animal rights activists think it is immoral and, indeed, evil.  And note the nuanced ethical analysis that went into the decision to create the sick pigs:

“I don’t think we should use this technology for something we can currently treat just so we can make the treatment slightly better, but we should use it for diseases that we don’t have treatments for,” he said...He continued to justify the work by adding: “If we believe we need to have therapies for these diseases – and currently society en masse believes that – then we surely have to have that tested in the best way we can before it goes into that patient. “Then the better the animal model – the more likely it’s going to tell you something about going into a human patient – the better. “And basically mice are mediocre at best and the majority of studies are done on mice.”

That seems the right approach to me, and I say it without joy or relish. But the potential benefit to find ways to treat incurable human diseases justifies the harm caused by manufacturing sick pigs—which would never be justified doing to human beings because of our higher  moral value than animals and the mutually equal moral worth to each other.

I’ll let you read the usual animal rights nonsense spouted by opponents about how animal research is pointless because animals and humans would not react identically to the experimental treatments, for yourselves.  That isn’t the point of basic research, which needs living human organisms for testing, and as the story points out, in this situation the pigs are closer to us than mice.

Here is the conundrum: New medicines at some point have to be tested on a living organism.  That can be dangerous and, indeed, may fail.  But if we don’t do it,  medical advancements will slow to a crawl, at best.  Thus, it is either risk mice—or as in this case, pigs—or endanger humans.  So which matters more, us or animals?  I vote, us.
0
Print
Email
Prev Article
Next Article