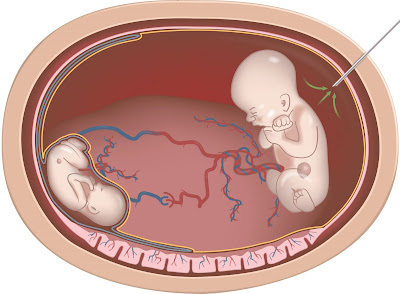 One of the things about our current cultural milieu that  has always puzzled me is the drive to create an absolute fundamental right to procreate—and the concomitant push to permit an absolute and fundamental right to destroy unborn life.  (You know how it goes: Today, the child is wanted so it is a baby. Tomorrow, the child isn’t wanted so its a fetus, not yet human life.)  And when both IVF and abortion are coupled in the same pregnancy, it really makes my head spin.  A new study in the  UK shows that this happens more than previously thought.  From the story:

Data released under the Freedom of Information Act has shown that an average of 80 abortions are carried out in England and Wales a year on women who have undergone IVF treatment. Doctors have said they are surprised at the figures considering the expense and difficulty that many couples go through when having fertility treatment.  However critics said women were treating babies like ‘designer goods’.

Some women said they were pressured into IVF by their partners and others said they aborted their pregnancy after their relationship broke down. Around half of the abortions are carried out for women aged between 18 and 34, who are less likely to suffer complications in their pregnancies or conceive babies with abnormalities, raising the question that they may have had abortions for ‘social reasons’. Prof Bill Ledger, a member of the Human Fertilisation and Embryology Authority, which regulates fertility treatment, said: “I had no idea there were so many post-IVF abortions and each one is a tragedy.”

The figures were released by the HFEA and show that in some of the cases the fertility treatment had been funded by the NHS. Selective reductions, where some of the foetuses in a multiple pregnancy are terminated to reduce the risk to the children and mother, are included in the figures. Ann Furedi, head of the BPAS, formerly known as the British Pregnancy Advisory Service, said it was likely that every doctor carrying out abortions had treated at least one woman who had IVF treatment only to change her mind when it was successful. She said: “For infertile people, overcoming the problem becomes a goal in itself.”

I once heard a Canadian bioethicist give a lecture urging women with multiple IVF-created fetuses to undergo “selective reduction”—boy, talk about a euphemism!—to, he said, “turn triplets into twins.”   Such sophistry!  Aborting one sibling triplet doesn’t magically transform the surviving babies into twins.  It means they are triplets and one sibling is dead.  How must that feel?  There but for the location of the forceps go I.
0
Print
Email
Prev Article
Next Article