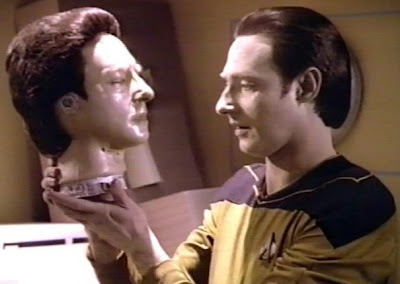 Apparently some of the richest people in Silicon Valley have caught the transhumanism bug—Google types, no less. An extensive article in Sunday’s New York Times’ business section tells the story. From. “Merely Human? That’s So Yesterday:”

ON a Tuesday evening this spring, Sergey Brin, the co-founder of Google, became part man and part machine. About 40 people, all gathered here at a NASA campus for a nine-day, $15,000 course at Singularity University, saw it happen. While the flesh-and-blood version of Mr. Brin sat miles away at a computer capable of remotely steering a robot, the gizmo rolling around here consisted of a printer-size base with wheels attached to a boxy, head-height screen glowing with an image of Mr. Brin’s face...The BrinBot was hardly something out of “Star Trek.” It had a rudimentary, no-frills design and was a hodgepodge of loosely integrated technologies. Yet it also smacked of a future that the Singularity University founders hold dear and often discuss with a techno-utopian bravado: the arrival of the Singularity — a time, possibly just a couple decades from now, when a superior intelligence will dominate and life will take on an altered form that we can’t predict or comprehend in our current, limited state. At that point, the Singularity holds, human beings and machines will so effortlessly and elegantly merge that poor health, the ravages of old age and even death itself will all be things of the past.

Please. We can’t even stop a catastrophic oil leak but in a few decades we will substantially defeat death? I think not. But it is a good myth to create that New Time Religion:

The university represents the more concrete side of the Singularity, and focuses on introducing entrepreneurs to promising technologies. Hundreds of students worldwide apply to snare one of 80 available spots in a separate 10-week “graduate” course that costs $25,000. Chief executives, inventors, doctors and investors jockey for admission to the more intimate, nine-day courses called executive programs. Both courses include face time with leading thinkers in the areas of nanotechnology, artificial intelligence, energy, biotech, robotics and computing. On a more millennialist and provocative note, the Singularity also offers a modern-day, quasi-religious answer to the Fountain of Youth by affirming the notion that, yes indeed, humans — or at least something derived from them — can have it all.

The current generations’—meaning the Baby Boomers and our progeny—sense of entitlement is so robust, some of us actually think we shouldn’t have to die. Come to think of it, that’s a plot line that goes way back, and at least in fiction, it never ends well.

But here’s an interesting irony: Most transhumanists are materialists. But they desire eternal life as much as the religionists that so many materialists disdain So they invent a material substitute that offers the benefits of faith, without the burden of sin, as they forge a new eschatology that allows them to maintain their uber rationalist credentials as they try to escape the nihilistic despair that raw materialism often engenders. So they tout a corporeal New Jerusalem and prophesy the coming of the Singularity—roughly equivalent of the Second Coming for Christians—that will, like the Hippie Age of Aquarius, begin a New Age of peace, harmony, and eternal life right here on Terra firma (or perhaps, in a computer here on Terra firma). You think I exaggerate the religious nature of the movement? Get this:

“We will transcend all of the limitations of our biology,” says Raymond Kurzweil, the inventor and businessman who is the Singularity’s most ubiquitous spokesman and boasts that he intends to live for hundreds of years and resurrect the dead, including his own father. “That is what it means to be human — to extend who we are.”

If resurrecting the dead isn’t religion, what is it?

Even if we could “seize control of our evolution,” we shouldn’t. We don’t have near the wisdom and it would be a big mistake to interfere with mortality. Besides, there are far more pressing needs to be remedied—like increasing the life expectancy of Africa past 35. But that’s okay. It won’t happen. Which is not to say that transhumanism should be ignored. To the contrary, the eugenic and master race (not in the Nazi sense) values that permeate the movement are dangerous. That is why it—as opposed to technological innovation—should be opposed philosophically at every turn.