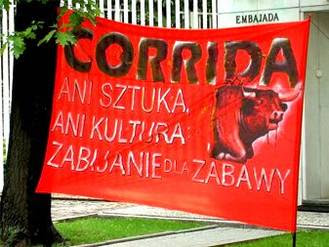 Bull fighting is like dog fighting, it seems to me.  It is cruelty for sport.  True, there is also the spectacle and the tradition, etc.  But it is the last remaining vestige of the Roman games in which humans and animals were set upon each other to satisfy the blood lust of the crowd.

Now Catalonia,may have had enough. From the story:

Bullfighting in Spain could suffer its biggest setback to date on Wednesday when the local parliament in Catalonia votes on whether to ban the practice in the separatist-minded northeastern region. The assembly is scheduled to vote on the issue on Wednesday morning after animal rights activists campaigning under the platform “Prou!” or “Enough!” in the Catalan language, collected 180,000 signatures in Catalonia on a petition calling for the motion to be debated and voted on by the assembly. The most recent indications are that a majority of the 135 lawmakers in the regional assembly are in favour of the motion to tighten Catalonia’s animal protection law to remove an exception for bullfights from a ban on the killing or mistreating animals in shows. If approved Catalonia, home to Barcelona, Spain’s second-largest city, would become the first region in the country outside of the Canary Islands to ban the practice and it could inspire other regions to follow its example.

Not animal rights: Animal welfare.  This measure doesn’t elevate the bulls to moral equivalence with people. It is people exercising human exceptionalism by recognizing their duty not to treat animals cruelly.  I hope it passes.
0
Print
Email
Prev Article
Next Article