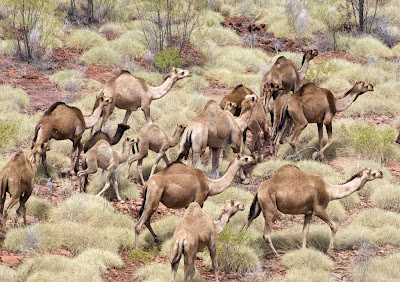 Fear of global warming is driving some  people absolutely bonkers.  Case in point: I was watching the news tonight from Perth and saw some professor opining that millions of feral (non indigenous) Australian animals should be killed in the name of fighting global warming.  After chuckling that such a recommendation wouldn’t exactly endear him to the animal rights folk, I thought—this is nuts!  So, I looked it up.  Yup.  It’s a serious proposal. From the story:

According to a study commissioned by the Nature Conservancy and the Pew Environment Group, 9.7 billion tonnes of carbon is stored in the nation’s central forests, grass and woodlands. However, through better land management, such as culling wild animals, reducing wildfires, limiting tree clearing and allowing vegetation to regrow, another 1.3 billion tonnes of carbon could be stored by 2050 - the equivalent of taking 7.5 million cars off the road every year for the next 40.

Pew spokesman Barry Traill said a program of culling feral camels was already underway, but needed to be extended. “When feral animals belch they release methane, a particularly noxious greenhouse gas, and every single camel or water buffalo releases the equivalent of around one tonne of carbon dioxide each year,” News.com.au quoted him as telling reporters in Canberra.“When you’ve got hundreds of thousands, in some cases millions, of these feral animals, it’s a very large amount of pollution each year.”

This will never happen—the outcry would be enormous.  Nor should it. But it shows how global warming hysteria has so distorted some of the big brains’ thinking that they propose ever more extreme—and cruel—policies in the name of saving the planet.  I repeat: This is nuts.
0
Print
Email
Prev Article
Next Article