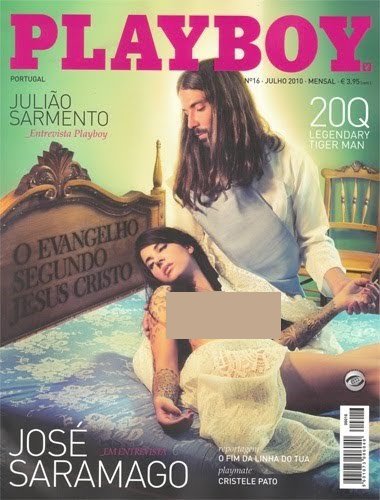 Our Lord also makes an appearance within the magazine, posing beatifically next to semi-topless women.

The imagery has an ostensibly literary purpose: As Robert Quigley notes,

Saramago was an atheist, and one of his most famous novels was titled The Gospel According to Jesus Christ (O Evangelho Segundo Jesus Cristo), depicting a flawed and human Jesus: You can see the book’s title engraved into the headboard of the bed on the Playboy cover.
(Here is the link to Quigley’s post. Though the nudity is covered up, it is still NSFW—unless, perhaps, you work at a strip club.)

It would be easy to express shock and outrage at the blasphemously pagan Portuguese. But we Americans—both heathen and believer—tend to be disrespectful of Christ too.

Although its not quite the same as a Playboy cover, a few years ago the popular fad was having images of Jesus on t-shirts. Hipster shops like Urban Outfitters would sell shirts with ”Jesus is My Homeboy” and “Jesus surfs without a board.” More annoying that the imagery was the excuses some people made for them. Daniel Richards, a priest at St. Michael and All Angels Episcopal Church in Tucson, AZ, said, “If Jesus is so reverent that we can’t laugh about him, then Jesus isn’t in our everyday lives.”


One can just imagine the Apostles, whose successors an Episcopal minister claims to be, wearing such t-shirts around Jerusalem in the weeks after the Resurrection. One can imagine Perpetua and Felicity ordering one to wear in the arena. One can see crowds of Sudanese Christians standing before army firing squads in such t-shirts. One can . . . oh never mind.

One cannot imagine the young Mr. Richards wearing a similar t-shirt with a comic message about Martin Luther King or any feminist whatsoever, no matter how obscure.
The t-shirt fad has faded, but the disrespect is still with us. Of course this is nothing new. From Jesus Christ Superstar to the latest Jesus action figures , Christ has long been a staple of ironic American imagery. Still, it is rather disconcerting. As my friend Rusty Lopez once asked, “What is it about our culture that causes us to consider the creator of the universe just another one of the gang?”

Good question. The cause, in my opinion, can be traced back to American Protestantism, particularly in the popular strands of evangelicalism. As a religious movement we have almost completely abandoned the concept of a transcendent creator in favor of a God who is our “best friend.” I remember as a young Baptist how we would gloss over the commands to “fear God” in favor of singing hymns about ”What a Friend We Have in Jesus.”

Even the Gnostic literary critic Harold Bloom is able to see where we err, as he wrote in his book The American Religion :


The American finds God in herself or himself only after finding the freedom to know God by experiencing a total inward solitude. In this solitary freedom, the American is liberated both from other selves and from the created world. He comes to recognize that his spirit is itself uncreated. Knowing that he is the equal of God, the American Religionist can then achieve his true desideratum, mystical communion with his friend, the godhead.


The idea of Jesus is mainly our “friend” is deeply rooted in our particular religious culture. Our lack of reverence expresses itself in everything from our worship to our evangelism. How many times, for instance, have we seen an earnest Christian approach someone (including us) and ask, “Do you know Jesus as your personal Lord and Savior?”

While intended as a means of carrying out the Great Commission, the question is asking something else entirely. In essence, it’s asking whether we possess God rather than whether God possess us . God is, indeed, our friend. But there is something about claiming God as our “personal” friend that seems to imply that we are putting him in the same category as our “personal trainers” and “personal assistants,” people who serve us, rather than someone whom we are expected to serve. When Jesus becomes someone we can befriend he becomes someone we can take lightly.

Jesus, however, is not my homeboy. The term “homeboy” always implies a co-equal relationship and never refers to someone who could be considered either superior or an inferior. Jesus may be a friend, but he is not my “buddy.” Christ is my master, my redeemer, my Lord and my God.

The Christian music artist Nicole Nordeman , in one of her most poignant and beautiful songs, expresses the proper attitude a servant should take toward the Master :


Have I come to casually?
Because it seems to me,
There’s something I’ve neglected.
How does one approach a Deity with informality;
And still protect the Sacred?


‘Cause you came and chose to wear the skin of all of us.
And it’s easy to forget You left a throne.
And the line gets blurry all the time.
Between daily and Divine.
And it’s hard to know the difference.


Rather than laugh about him, as the Episcopalian priest suggests, or put Him in the toybox with Barbie and G.I. Joe, we should remember how his own friends viewed him when he walked among them and treat him with the fear, respect, awe, and adoration due our God.
0
Print
Email
Prev Article
Next Article