1. Jonathan Mitchican on the cassock :

The cassock was once the standard article of dress for Christian priests. Long after the Great Schism divided the east from the west, the cassock remained a symbol of priesthood that was acknowledged by Catholic and Orthodox alike. Cassocks have been worn by priests for so long that their origin is somewhat mysterious (despite the certainty that Wikipedia seems to have in the matter). They probably developed out of the common tunic that was worn by almost everyone in the Roman Empire. By as early as the seventh century, though, the cassock was a distinct enough garment that people identified it with clergy. The cassock was a symbol of the priesthood in the way that a white coat is a symbol of medicine or a tie is a symbol of formality and professionalism.

But all of that is over now, at least in the west. At age thirty, I’m the product of a post sixties, post sexual revolution, post Vatican II world. There’s no room for the cassock in the world in which I’ve grown up. I’ve never seen a Roman Catholic priest wear one, outside of the movies. In my own tradition, cassocks are reserved for liturgical functions, and even then they’re becoming rare, traded in for the more functional cassock-alb. To wear a cassock when not officiating at liturgy is to paint one’s self as a stuffy traditionalist who is pining after the nineteenth century, a clueless old fuddy duddy who is still trapped by the oppressive social norms of yesteryear.

Ugly people are more likely to break the law. This is the statistically based conclusion in a paper published in The Review of Economics and Statistics entitled Ugly Criminals. The BBC describes the findings as being significant in “the new field of anthropometrics”, suggesting that this could be a handy profiling tool. In fact, anthropometry, in particular detecting criminal tendencies by the measurement of facial characteristics, is a very old discipline. It was previously condemned as pseudoscience – could it be making a comeback?

Regular alcohol consumption provided protection against rheumatoid arthritis and its painful effects, U.K. researchers found in the first study to show the link in humans.

Non-drinkers were four times more likely to develop rheumatoid arthritis than people who drank alcohol on more than 10 days a month, according to the research published online today by the U.K. journal Rheumatology. Arthritis patients who drank regularly had less severe symptoms than non-drinkers, the study found.

6. Bear News of the Week (Part I): A black bear on Tuesday walked into a New Hampshire home, ate two pears, some grapes, took a sip from a fishbowl and grabbed a stuffed bear on the way out of the house.

8. Quote of the Week: “All poetry can be seen as a conversation between poets over time.” — Adam Kirsch on sonnets.

9. Daniel Ellsberg on the Limits of Knowledge -What he told first-time government employee Henry Kissinger about the power and limitations of the security clearances he was about to receive:

“First, you’ll be exhilarated by some of this new information, and by having it all — so much! incredible! — suddenly available to you. But second, almost as fast, you will feel like a fool for having studied, written, talked about these subjects, criticized and analyzed decisions made by presidents for years without having known of the existence of all this information, which presidents and others had and you didn’t, and which must have influenced their decisions in ways you couldn’t even guess. In particular, you’ll feel foolish for having literally rubbed shoulders for over a decade with some officials and consultants who did have access to all this information you didn’t know about and didn’t know they had, and you’ll be stunned that they kept that secret from you so well.

11. Medieval multitasking and the hypertexted quality of medieval illuminated manuscripts

The function of these images in illuminated manuscripts has no small bearing on the hypertext analogy. These “miniatures” (so named not because they were small-often they were not-but because they used red ink, or vermillion, the Latin word for which is minium) did not generally function as illustrations of something in the written text, but in reference to something beyond it. The patron of the volume might be shown receiving the completed book or supervising its writing. Or, a scene related to a saint might accompany a biblical text read on that saint’s day in the liturgical calendar without otherwise having anything to do with the scripture passage. Of particular delight to us today, much of the marginalia in illuminated books expressed the opinions and feelings of the illuminator about all manner of things-his demanding wife, the debauched monks in his neighborhood, or his own bacchanalian exploits. 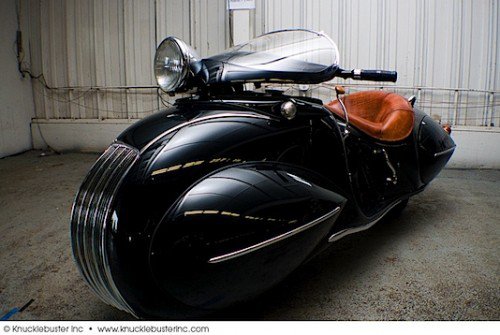 O. Ray Courtney was a designer from the 1930s-1950s who applied Art Deco stylistic principles to motorcycles. Pictured above is a 1936 motorcycle that he built in that style from a 1930 Henderson, carefully restored by its owner, Frank Westfall. You can view more pictures here .

Action was finally taken in 1992 (bracing the first storey with steel tendons, to relieve strain on its vulnerable masonry) and in 1993 (stacking 600 tons of lead ingots on the piazza to the tower’s north, to counterweight the lean). Yet both measures, especially the lead ingots, riled the aesthete Italian public, deforming as they did the slender tower’s bella figura.

In response, in 1995, the committee opted for 10 underground steel anchors, to invisibly yank the tower northwards. Little did they know, though, this would bring the tower closer to collapse than ever before, in an episode now known as Black September.

15. The Future is Here. And We’re Impatient

I now have in my possession a pocket-sized computer which, when I speak a question to it (“Who is the author of Kraken?” “Who was the fourteenth president of the Unites States?” “What is the name of John Scalzi’s cat?”) provides me an answer in just a few seconds. If I take a picture of something, the same pocket computer will analyze the photo and tell me what I’m looking at. Oh, and it makes phone calls, too. Among other things.

16. Infographic of the Week: History of The Beatles as told by their hair

17. Big Brother knows the color of your shirt

By tracking customers’ spending habits, retailers get a bird’s-eye view of tastes as they ebb and flow. Online retailers, in particular, see every click we make. They know which brands we’ve peeked at, how long we pondered, and what we actually purchased. They know the time of day and the days of the week that we shop. They know—and record—our color choices, sizes and tastes so that they can recommend clothes that are in tune with our yearnings.

Our banks have nearly as much information about our purchasing habits. “We know where the customers live and we can track their behavior back to where they live,” says Ed Jay, senior vice president of American Express’s Business Insights unit, which mines its credit-card data for consumer trends and sells reports to clients. American Express says it doesn’t provide data on individual consumers.

19. Winston Churchill’s Dentures Were Designed to Preserve His Lisp

In his wartime radio broadcasts, Churchill’s distinctive voice was instantly recognisable. He wanted it to stay that way, so he had his dentures designed specifically to preserve his lisp.

They were made by a young dental technician called Derek Cudlipp, and a set of the dentures has been in his family since Churchill’s death - but have been sold at auction for £15,200.

20. Ad of the Week: Parkour with Ladders

21. Atul Gawande on The Paradox of Hospice

“Like many people, I had believed that hospice care hastens death, because patients forgo hospital treatments and are allowed high-dose narcotics to combat pain. But studies suggest otherwise. In one, researchers followed 4,493 Medicare patients with either terminal cancer or congestive heart failure. They found no difference in survival time between hospice and non-hospice patients with breast cancer, prostate cancer, and colon cancer. Curiously, hospice care seemed to extend survival for some patients; those with pancreatic cancer gained an average of three weeks, those with lung cancer gained six weeks, and those with congestive heart failure gained three months. The lesson seems almost Zen: you live longer only when you stop trying to live longer.”

Our imaginations are caught between two unstoppable empires: the retrofuturistic world of steampunk, and the shambling hordes of zombies. The only thing more popular than a steampunk world or a zombie world is steampunk with zombies. But what’s next?

When I think about these two strands of speculative fiction culture, it occurs to me that our love of steampunk and our fascination with zombies are two sides of the same coin.

Steampunk represents an idealized past, while zombies represent a horrible future. So they’re both outlets for our inexorable pessimism about our current era.

The latest “men are from Mars, women are from Venus” declaration from sex researchers: Young men are more emotionally influenced by the quality of their relationships, while young women are affected by whether they are single. The takeaway: Men’s happiness depends on having an emotionally-supportive relationship, while women’s happiness depends on not being alone, period

26. Ancient Ninja: Separating the Men from the Myth

27. How-To of the Week: Make Your Own Glow Sticks

One side believes it possesses an infallible book written by an omnipotent author with a huge beard with completely explains the dynamics all living things on earth. The other side believes in the literal truth of the bible

30. An annotated list of the best film criticism blogs.