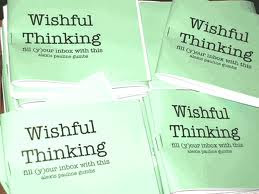 An AP “Poll” is out that apparently finds that a plurality of people believe that Obamacare didn’t go far enough, while only 20% want the law repealed. From the story:

Voters who say the new health reform law was too conservative outnumber by 2 to 1 those supporting repeal, according to a poll released Saturday. About 40 percent of respondents said the law was too timid in overhauling the nation’s healthcare system, while 20 percent said they’d like to see it scrapped, according to the survey, commissioned by The Associated Press (AP).

Wow.  That sounds serious.  Why, people aren’t against the law, they actually want an even more radical overhaul than anyone understood!

But if that were true, wouldn’t Democrats be running on the plank of, “Let’s finish the job?”  Instead, they are running away from their health care law as fast as their legs will take them.

Are they that politically dense?  Well, close, but not that dumb.  If they thought the law was a political winner, they would run on that record.

Oh wait. Ah, I see. The poll is actually an online survey,  in which the survey takers apparently decided who to have answer the questions.  Here’s how:

The Associated Press 2010 Health Care Reform Survey, by Stanford University with the Robert Wood Johnson Foundation, was conducted Aug. 31-Sept. 7, based on 1,251 adults. The national survey was conducted online by Knowledge Networks of Menlo Park, Calif., under the direction and supervision of AP’s polling unit.Knowledge Networks initially contacted people using traditional telephone and mail polling methods and followed with an online interview. People chosen for the study who had no Internet access were given it for free. With a probability basis and coverage of people who otherwise couldn’t access the Internet, the Knowledge Networks online surveys are nationally representative. Results were weighted, or adjusted, to reflect the adult population by demographic factors such as age, sex, region, race and education.

Maybe that’s why it seems to be skewed blatantly toward obtaining a certain result.  For example, a recent CNN Poll only gave President Obama a 42% approval, but this survey has “lean favorable” toward Obama at 57%. He hasn’t been that high in reliable polls for at least a year.  Hence, I don’t think 40% of the American people really think Obamacare is too timid.

Still, I could be wrong.  In fact, I urge those House and Senate members who voted for Obamacare, buck up!  The poll survey is on your side!  Have courage!  Run on the promise of going even farther than you did last year!  Run on the promise that you will have the government take over even more of health care.  Please do.  Pretty please?
0
Print
Email
Prev Article
Next Article