The Cardinal Newman Society in America is probably known best for protesting morally questionable speakers at Catholic colleges and universities. But they also serve as a support for orthodox educators and administrators and students. And they also are playing a role in the preservation of Cardinal Newman’s archives, to the potential academic and spiritual benefit of us all. Patrick Reilly, their president, is over in Birmingham, and chats a bit about the experience and the effort to protect what we have from Blessed Newman.

Kathryn Jean Lopez: What has the mood been like in Birmingham?

Patrick Reilly: There is great excitement among Catholics, who are not used to getting such positive attention—and more, to be hosting the first-ever beatification in England. Even among Anglicans and others, there is a sort of fascination about the visit. BBC News, for instance, varies between uninformed attacks on Pope Benedict and significant news coverage of his activities here, far better coverage of his message than appeared in the U.S. media in 2008. I had the opportunity to attend the Birmingham town council’s dinner Saturday to celebrate the papal visit, and politicians of all stripes were claiming a culture of accommodation for all faiths—borrowing a key theme of the Holy Father’s visit.

Lopez: What’s been the highlight of the papal visit so far? 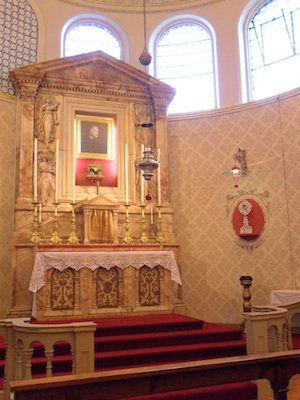 Reilly: Certainly the beatification of John Henry Cardinal Newman is the highlight. Newman is the patron of the Cardinal Newman Society, and because our American pilgrims were invited guests of the Birmingham Oratory at the beatification Mass, we had seats just two and three rows from the altar. But had we watched on television, I doubt the impact would have been less. It has been a long road for the Oratory to get to this point, with significant spiritual attacks, and I was overcome with emotion seeing the Oratory Fathers see all of their hard work come to fruition—and with gratitude that the Cardinal Newman Society might play some small role in this momentous event. Newman has so much to teach us today.

For the Cardinal Newman Society there was a second highlight, and that was Pope Benedict’s address to Catholic educators. He forthrightly addressed a key problem in Catholic higher education: capitulation to the idea of education as job training. “ . . . [E]ducation is not and must never be considered as purely utilitarian. It is about forming the human person, equipping him or her to live life to the full—in short it is about imparting wisdom. And true wisdom is inseparable from knowledge of the Creator.” Who can argue that Western society today is overrun with technically skilled workers, politicians, lawyers and doctors who often lack wisdom and ethical formation?

Lopez: Tell us something I would never know about this visit from just watching on television or reading the press reports.

Reilly: The most intimate portion of the Holy Father’s visit will remain so, because the media were not permitted to invade the Birmingham Oratory where Pope Benedict visited Sunday. The Oratory was founded by John Henry Newman in 1848, and it is where he died in 1890. Pope Benedict visited to spend time in prayerful reflection in Newman’s personal room, chapel, and library, and to view some of the 10,000 priceless manuscripts in Newman’s archive which remains at the Oratory. As Pope Benedict reportedly has such great affection and respect for Newman, one can imagine the Holy Father’s emotions when holding the original manuscript of Newman’s famous “Tract 90” and some of the yet-unpublished letters and sermons. The Cardinal Newman Society’s pilgrims had the same experience on Friday when we visited the Oratory, upon the gracious invitation of Provost Very Rev. Richard Duffield, Cong. Orat.

Lopez: So what exactly is your connection to the Newman oratory ?

Reilly: For years the Birmingham Oratory has struggled to cover the large expense of investigating possible miracles and otherwise advancing the Cause for Newman’s Canonization. Meanwhile Newman’s handwritten letters, diaries, sermons, lectures, poetry, and more remained in need of proper preservation and security. As one part of our Newman Legacy Project to promote and preserve Newman’s legacy—especially as it relates to Catholic education and the problem of secularization—the Cardinal Newman Society is working to raise funds to build a climate-controlled, fireproof archive building at the Oratory. One prominent archivist in Europe described the Newman archive as the most important project in the West. The availability of these manuscripts will have great importance to scholars and will increase appreciation for Newman’s importance in today’s society. We are ten percent of the way toward our goal of just over $1 million for the Newman Legacy Project, which also includes prayer campaigns and educational efforts in the United States.

Lopez: Besides helping the oratory, you’ve got a very clear spiritual component to your trip. Why was that important? What is it centered around? 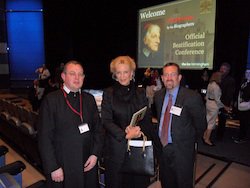 Reilly: Newman has been appreciated widely for his intellect and his amazing prose, but that would mean little if not for his deep love for God and the Catholic Church—and his fascinating journey that led him there. For instance, Newman’s Idea of a University has been reduced to a defense of the liberal arts, ignoring his primarily spiritual purposes and his arguments against the secular university. Newman was intensely spiritual and self-reflective, and was above all a pastor to the people of Birmingham as well as the intellectuals with whom he corresponded. Our spiritual guide Father Michael Barber, S.J., is a Newman scholar and has celebrated Mass for us at the Birmingham Cathedral and today in the Newman Shrine at the Oratory, in the presence of Newman’s relics and assisted by Deacon Jack Sullivan, whose back was healed miraculously by Newman’s intercession.
Lopez: You were at a Newman conference this weekend. Give us some highlights.

Reilly: The City of Birmingham and the Birmingham Oratory co-sponsored a conference featuring four leading biographers of Newman. These included the preeminent biographer Rev. Ian Ker pf Oxford University, and also Rev. Keith Beaumont of France whose newly released biography was chosen as the official beatification text by the Oratory.
Lopez: What’s so special about Cardinal Newman?

Reilly: Newman was a prominent nineteenth century convert, priest and scholar who authored The Idea of a University , which defined the liberal arts and Catholic higher education for more than a century. Newman’s other important works—concerning faith and reason, papal authority, doctrine, conscience and Liberalism—have led many to refer to him as the “Father of Vatican II.” Newman’s critique of secularism is extremely important to the Vatican’s efforts today to re-evangelize Europe and the United States.

Lopez: You’ve been involved in higher education since longer than I’ve known you—and we’ve known one another for at least fifteen years. Why is Cardinal Newman so essential to it—in both Catholic and secular schools?

Reilly: The solution to secularization in Catholic higher education can hardly be said to depend entirely on the writings of one man, and yet God raises up leaders when they are needed, and the nineteenth century Newman gets right to the core of what is wrong with many Catholic colleges and universities today. When theology is marginalized and provokes embarrassment among faculty as somehow lesser than other disciplines . . . when professors use their platforms at Catholic universities to provoke doubt in God’s revelation . . . and when academic freedom is used to justify nonsense and anti-intellectual activity, Newman lucidly provides most of the answers that educators need today in his Idea of a University and related manuscripts.
Lopez: What are the goals and hopes, besides preserving things?

Reilly: Other activities of the Newman Legacy Project of the Cardinal Newman Society include lectures, media outreach, fellowships for Newman scholars, and distribution of short films about Newman in cooperation with Corpus Christi Watershed of Corpus Christi, Texas. I should note that Corpus Christi Watershed did such a beautiful job on the film that preceded Sunday’s beatification Mass, and their director Brother Daniel Varholy has helped substantially with the archive project at the Birmingham Oratory. It’s an outstanding Catholic arts collective that also deserves financial support.

Lopez: How important to you is his conversion story, especially in the work you do?

Reilly: Newman’s conversion could be seen as reflecting the journey that students should experience at a Catholic college or university. He had the desire for Catholicism while an Anglican, but it was by reason and study that he came to the realization that the full truth of Christianity lies within the Catholic Church. Even students who are raised in strong Catholic households and perhaps have studied at Catholic schools often lack the tools of reason to apply and integrate all that they have learned about God and His Creation. Newman’s approach to education in The Idea of a University helps students make their own intellectual and faith journeys—perhaps not identical to Newman’s, but possibly as fruitful.