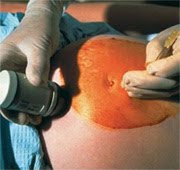 It seems indisputable to me that the medical elites and many in bioethics wish to wipe people with Down syndrome off the face of the earth using the killing tool of eugenic abortion—or if that doesn’t work, infanticide or medical neglect.  This has led to a counter movement to value our brothers and sisters with Down into the human community. For example, as I reported here, the late Senator Ted Kennedy and Senator Sam Brownback passed a law through Congress, signed by President Bush, requiring that genetic counseling for mothers whose fetuses have tested positive for Down, dwarfism, and other genetic anomolies, not be directed to any particular outcome.  The senators believed the law was necessary because studies showed that women were often pushed toward the abortion option.

Another method of push back is for women to refuse testing altogether.  Their thinking is that they are going to love their baby come what may—gee, unconditional love, what a concept!—and they worry about being tested because of the pressure they will come under to abort.

One such mother has written a story in the NYT about her decision not to receive such testing, even though she already gave birth to one child with Down and the chances are greatly increased that she will do so again.  From “Why Prenatal Testing Harms as Much as it Helps,” by Amy Julia Becker:

For this pregnancy, I have had two ultrasounds, and I have agreed to a fetal echocardiogram. But I declined the blood tests that screen for chromosomal abnormalities. I declined the amniocentesis. I didn’t return my insurance company’s calls when they wanted to assign a nurse to guide me through this pregnancy. I’m not opposed to having information about our baby ahead of time. I want to know everything we could know in order to care for this child well. If there is a physical problem, if I need to deliver with specialists on hand, if our baby is at high risk of complications, I want to know about it, and the tests we have chosen should provide that information. And although I declined, I’m not opposed to prenatal testing. There are benefits to knowledge. According to Dr. Brian Skotko of Harvard Medical School, studies have demonstrated the helpfulness of prenatal diagnosis. Women who know ahead of time that their babies have Down syndrome are able to celebrate their arrival into the world, and often these women feel better prepared for the challenges they might face as a parent.

That’s what happened with Sarah Palin.  She says knowing ahead of time helped her prepare to welcome Trig with open arms (which, as I have written, is one reason why I think she generates so much hate from certain quarters). But pre natal testing, which could be so beneficial, clearly has a darker side—the targeting of those deemed deficient:

On the other hand, the way these tests are administered, the way information is provided to women and the way our culture talks about and conceives of individuals with chromosomal abnormalities contribute to my concern that prenatal testing more often serves to devalue all human life and to offer parents and doctors an illusion of control. When a friend of mine, who has a daughter with Down syndrome, declined amniocentesis for her next pregnancy, her doctor shrugged and said, “Well, if it happens again, don’t blame me.” Another friend, upon receiving the results of her amniocentesis, was asked, “When would you like to schedule the procedure to terminate?” Peter and I have participated in a program through the Robert Wood Johnson Medical School in which medical students meet families with a child with a disability. These doctors in training have told me that before they met Penny, they thought Down syndrome was the worst possible thing that could happen to a child. A medical-school professor at the University of North Carolina offered validation to their report when he said to his class, ‘‘In my opinion, the moral thing for older women to do is to have amniocentesis, as soon during pregnancy as is safe for the fetus, test whether placental cells have a third chromosome 21, and abort the fetus if it does.’’

That last bit reminded me of a speech I once gave at a medical school about the urgency of seeing all human beings as possessing equal moral worth in the medical system.  Afterwards, a soon to be doctor said to me, “I do genetic counseling.  What should I do when a fetus has tested positive for Down?” his implication being that there only is one right decision.  I suggested that perhaps he should bring in families of people with Down to help explain to the woman or couple what life is really like for families with such children.  He looked at me as if I were from Mars.

We hear so often, as in AIDS, about how prejudicial attitudes of medical professionals hurt patients.  That problem is clearly true with regard to Down and other genetic conditions that can be diagnosed prenatally.  Because women know that they would be expected to abort, they are instead of opting out of beneficial testing.  That’s not their fault. It’s that of the medical professional—and of a culture that too often rejects human exceptionalism.  We all have a lot of work to do cleaning up our prejudicial act.
0
Print
Email
Prev Article
Next Article