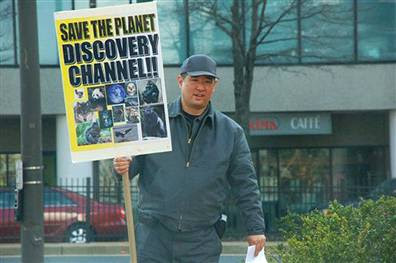 There is a hostage drama ongoing in which a man—apparently an enviro nut—has invaded the Discovery Channel (of all places) to make demands.  From the story:

Lee appears to have posted environmental and population-control demands online, saying humans are ruining the planet and that Discovery should develop programs to sound the alarm. “I want Discovery Communications to broadcast on their channels to the world their new program lineup and I want proof they are doing so. I want the new shows started by asking the public for inventive solution ideas to save the planet and the remaining wildlife on it,” the alleged manifesto reads, adding:”Nothing is more important than saving ... the Lions, Tigers, Giraffes, Elephants, Froggies, Turtles, Apes, Raccoons, Beetles, Ants, Sharks, Bears, and, of course, the Squirrels. The humans? The planet does not need humans.”...Lee said he experienced an ‘‘awakening” when he watched former Vice President Al Gore’s environmental documentary ‘‘An Inconvenient Truth.”

I bring this up because we often hear legitimate advocacy in the public square (on a variety of issues) blamed for the violence committed by a nut or two who support that movement: In other words, some use the criminality of the rogue to smear and discredit one’s political/ideological opponents.  But one nut does not define a movement and people who argue in the public square on behalf of controversial issues are not responsible for the actions taken by said nuts.  Thus, Al Gore has zero responsibility for this terrorism, even though his movie is propaganda, just as technology skeptics have no responsibility for the Unabomber, or the pro life movement for the man who murdered the late term abortionist, Dr. Tiller.

However, when a group of ideologues organize for the specific purpose of  engaging in terrorism/lawlessness as a tactic—such as the Animal Liberation Front (ALF) and the Earth Liberation Front (ELF)—that is a different matter altogether. In such cases, it is incumbent upon the movement leaders, in support of which the terrorism is being mounted, to unequivocally denounce such tactics and cooperate with authorities in bringing the responsible to justice. Silence or winking approval in such cases amounts to praise by faint or non-damnation. In that case, I believe some blame can fairly be laid at the movement’s doorstep.

But that is clearly not the case here.  In viewing this situation, it appears to be the work of a lone nut and one nut does not a movement besmirch no matter how influenced he was by the movement’s advocacy. Or to put it another way, radical environmentalism is not to blame for this man’s radical acts.

Update: The Discovery Channel victims are safe and, alas, the gunman is dead.  Again, it isn’t the fault of anti humanist radical environmentalism, to which he clearly subscribed, but (I suspect), mental illness.
0
Print
Email
Prev Article
Next Article