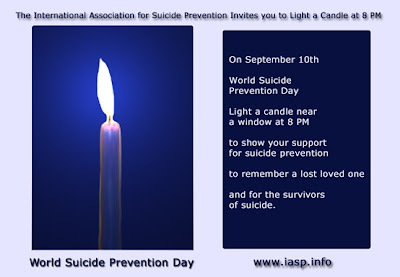 September 10 is Worldwide Suicide Prevention Day.  Good.  But, I fear not very effective.

The well meaning people behind WSPD have missed-or were afraid of the controversy that would be caused by tackling—the proverbial elephant in the living room.  You see, many high profile voices now urge that suicide not only be permitted, but facilitated.  Thus, Worldwide Suicide Prevention Day should have an asterisk after the title:

*Prevention, that is, unless:


In other words, I don’t see how suicide prevention can be effective when there is so much outright suicide promotion going on. But the International Association for Suicide Prevention is silent about the threat posed to the cause of suicide reduction by assisted suicide and “rational suicide” advocacy. Not. A. Peep.

And let me also express my frustration with an aspect of this campaign that we now see ubiquitously in “cause” advocacy. We have become a world in which meaningless symbols often matter more than effective action. Not only does Worldwide Suicide Prevention Day not tackle the problem of suicide promotion in society—it suggests we engage in gesture advocacy to show how much we care.  From the Suicide Prevention Day website:

And then, let’s pin colored ribbons to our lapels.

Don’t get me wrong. I am obviously for suicide prevention and the WSPD can’t hurt.  But avoiding crucial issues and engaging in, “It makes me feel good” symbolism, just doesn’t cut it.
0
Print
Email
Prev Article
Next Article