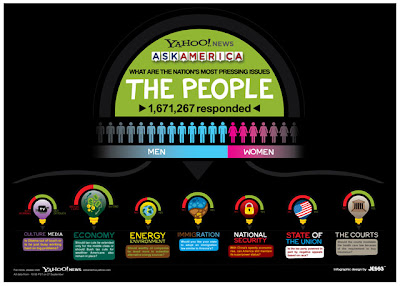 An intrepid SHS news tipper sent me a head’s up that Yahoo conducted a huge survey—it appears not to be a scientific poll—but I think it is significant.  A whopping 65% of the some 16,000 surveyed on this issue (this corrects my mistake that all 1.6 million were surveyed) want to repeal Obamacare because of the universal mandate. From the survey:

65 percent want the courts to invalidate the health care law because of its universal mandate.

Obama doesn’t, and guess what:

65 percent believe Obama is “out of touch,” while 35 percent maintain he is “busy working on hard problems.”

Could there be a connection?  I think at least in part.

It may not be scientific, but the size of the survey—even at the smaller size—reflects intensity because activists will often get their fellows to answer such surveys.  Either way you cut it, though, I think it is another indication of why the Democratic Party is running from its own law.  They know the people don’t want it.  They know that people don’t like the way it was shoved down their throats.  And they know there is going to be a political price to pay for acting so arrogantly in the face of such widespread opposition.
0
Print
Email
Prev Article
Next Article