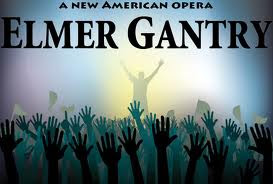 Al Gore is Elmer Gantry.  Expert at posing as the Puritan, he preaches hell and brimstone and calls on us to be saved by saving the planet.  And he’s gotten very rich doing it.  He won (ludicrously) the Nobel Peace Prize.  He’s become a rock star of the Left.

But walk the walk as if the world really is in danger?  Not on your life.  He’s special.  The low carbon footprint rules don’t apply to him.

It seems that Gore was in Sweden to sow his usual hysteria and bask in the love. And as usual, he acted in precisely the opposite manner that we mere shlubs are harangued to do.  From the story in Climate Depot:

This time, he turned up in Gothenburg (Sweden) for the usual alarmist talk. In advance, all distinguished guests were politely advised to – if possible – use any form of public transportation to go to the event, in order to minimize CO2 emissions. Intriguingly, the Master of World Climate himself arrived in a rental car (with or without driver is unclear), from the airport, and subsequently left the engine running for the entire lecture. That is to say, about one hour. Incidentally, local legislation prohibits – for very good environmental reasons, i e pollution – any car engine running on empty for more than 60 seconds. Fines are severe. As far as I know, he was not fined.

It starts to form a pattern. After the ceremony in the Norwegian capital Oslo, it is customary that the laureate is invited to the Swedish capital Stockholm, for a cordial visit. The train ride, supposedly the environmental choice according to Mr. Gore, is approximately four hours. However, he opted for the cosier ride with one of the Swedish government aircrafts. As these can, according to the rules, only be used when a cabinet member is on board – and as the Swedish government after a short ceremonial visit – offered to fly him to Frankfurt (Germany) for his flight to the US, you can calculate both the manpower and the fuel used for this grand tour against man’s destruction of the planet.

Admittedly this report comes from skeptics.  But there is no reason to think it is false.  Indeed, given Gore’s hypocritical history, it almost surely is true.

Gore Gantry preaches abstinence and fidelity as he plows a swath through the choir.  If the planet is really going to fry, you have to lead by example—even in small things like idling cars and taking trains.  Otherwise people are going to think it is just an ego trip and a power scam.
0
Print
Email
Prev Article
Next Article